“So you’ve come on this little expedition, too?”

This is a short tale that began with a call I received from Regulus about a week from 2012’s end.

We two had earlier in the month discussed a historical route about which Regulus had recently learned, but now said historical route needed scouting; due diligence as part of a larger project. Would the crew mind spending New Year’s Eve busting through brush to survey, document, and flag this route?

This opportunity — which for now I must call the Meriadoc Route — was nowhere near the scope of our ill-fated Agua Blanca Survey last summer, but I was glad to have a go. I told Regulus the RSO, DAW-G, and I would be down. 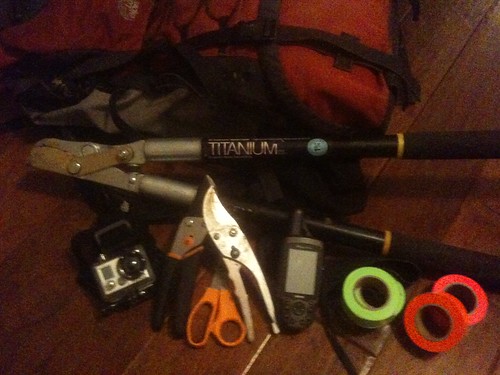 The day’s crew consisted of we three, Regulus, and Histosol. I’ve supped and hiked and done trail work with Regulus a few times over the past couple of years, and seem to cross paths with Histosol out on the trail every so often. 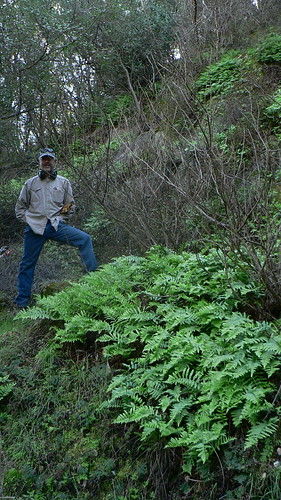 We set the shuttle vehicles, and shortly thereafter as we tramped along the trails that would lead to the jump-off point, the tread at our feet was a cross-pattern of frosted sycamore and big-leaf maple leaves. It was cold. (Read: This was already shaping up to be a better day than the Agua Blanca.) We had the requisite safety chat, discussed the nearby routes, witnessed old steel markers and tread. The subject of our attention this day had been abandoned decades ago. We weren’t sure what to expect.

Now Regulus may never admit it, and admittedly it may all have been in my head, but when Regulus gave the go I’m pretty sure I heard trumpets sound and a thousand voices rise up and shout “release the hounds!”

The RSO and DAW-G and I took off along the surprisingly healthy (though overgrown) tread, eager for a day’s brush-busting. 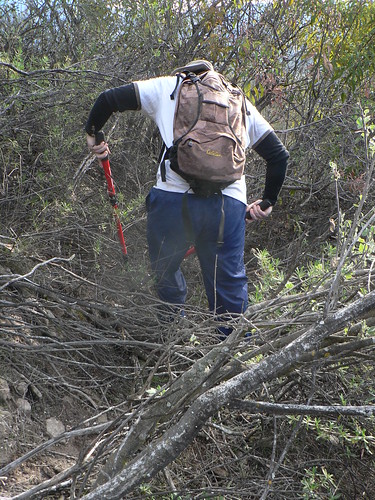 The route proved a tale of four quarters, and a textbook example of the slope effect. The first section, consisting primarily of north-facing ferns, moss, and relatively forgiving swathes of open chaparral, soon gave way to the drier, considerably harder chaparral of the first south-facing slope. This is where DAW-G, always game for a bloodletting, took point and sniffed out tread, whilst I lopped, pre-flagged and documented, and the RSO cleared and better-flagged the route once we established we were on the right track. (Therein lie the inherit danger in flagging and clipping as one goes … take a wrong turn, and you’ve done a disservice to the next crew. Slow and steady wins the trail, and we’ve found this three-man approach pretty successful.) Regulus and Histosol followed, wielding their tools like demons possessed. 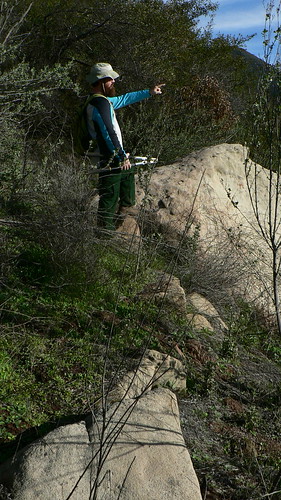 There were several stretches where animal traffic had circumvented stretches of the old and overgrown tread, but in the interest of keeping to the historic route as closely as possible and with my Garmin tracking all the while, I made every effort to “stay the course.” This entailed re-walking (well, crawling, mostly) stretches of the route where applicable, much to the chagrin of my clothing and any exposed skin.

Apologies now for general poor video quality; I still had the waterproof door on the GoPro from the previous weekend’s excursion, and enough crashing through the brush this day seems to have stunned the camera into some pretty rough cuts. Recommend audio off.

At some point after the third belly-slink, somebody mentioned they were glad this wasn’t the Dick Smith and its relentless and brutally unforgiving wild rose. I certainly couldn’t argue the point; the waters of Rancho Nuevo Creek are still red with my and Bo’s blood.

Finally we came to the headwaters of an unnamed ravine, which constituted the start of the third leg. The stretch that followed was — by all five participants’ accounts — the nicest, and one at which we simply had to marvel. A route left untrodden for a half-century, over half of which was easily navigable (thanks to the local ursine population, no doubt, but I’ll address those specifics another time).

Every 100 yards or so — in addition to the fine trail bed laborers of generations past had cut — we would also encounter hand cuts in aged manzanita and mountain mahogany with trunks as thick as my thigh (which is to say, thick). We found evidence of old rockwork, and even the remains of old trail ducts. Never mind DAW-G had lost a liter or so of blood from his forearms, this was awesome! 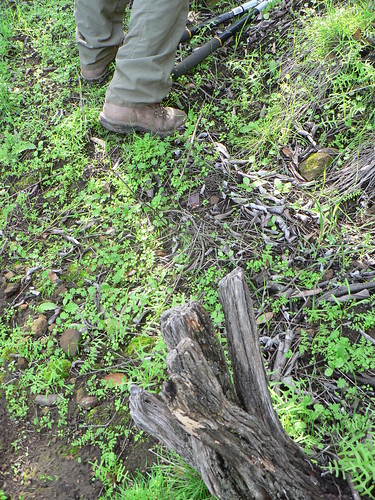 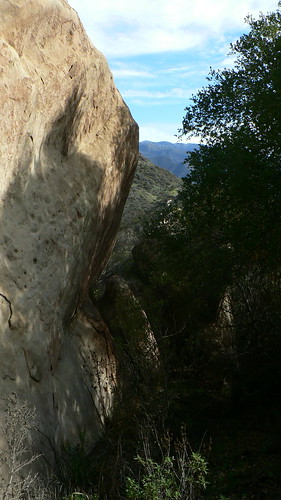 We spent a leisurely few moments navigating this, the second northernly aspect. Only a few stretches called for less-than-Victorian posture. 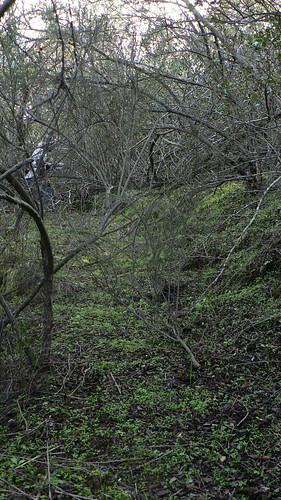 After crossing a moist and fern-clad ravine, I did spy a stone that had been carved with some directions, most of which I am loathe to admit I didn’t linger to decipher. 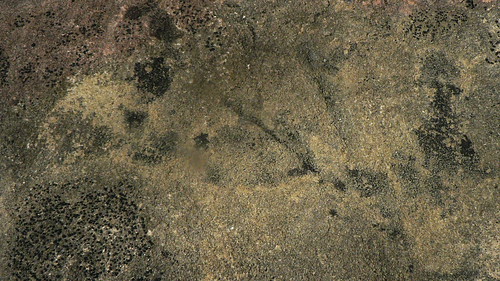 Soon, we had the copse of sycamores we had determined to be our southern terminus in our sights, and so thought our work nearly done. It was, but not before wandering through a rather intimidating series of bear beds … and passing a few small caves that were at about carotid artery-level didn’t help things. But soon enough we emerged from the last tunnel o’ brush and again found ourselves on the drought-tolerant side of things. Here, Regulus headed back up to re-join Histosol and we three were tasked with finding a way down.

We surveyed a while, and picked around different game trails. Yucca, sage, and … nothing. The trail was gone.

So the fourth leg got a little sketchy; fires that have run through this stretch of our beloved backwood caused enough erosion that two lengths of where the route may have been now bear massive rents along the way. Add to that the fact the lower access is no longer practical for a few reasons with which I’ll not bore you, and we were left to “dead-reckon” a route down to those P. racemosa both (somewhat) safe and (relatively) practical. 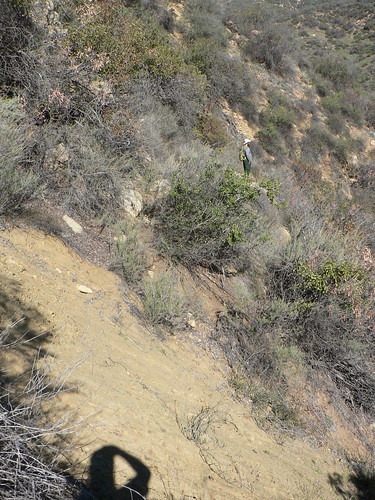 We put the clippers away and navigated carefully across the washes, flagging once we knew we’d determined or defined the best route from A to B. About half-way down we found a lovely knoll carpeted in bushy spikemoss, and so found a bare spot on which to sit a spell and have a spot of lunch. The views were fantastic, and so having a heart only marginally larger than that of the Grinch, I was sure to record a bit of video to send off to the Expat, who we all knew was enduring single-digit temperatures and lake-effect snows at the same moment we were enjoying high 50s, full sun, eating Spam sandwiches and sipping single malt in t-shirts. 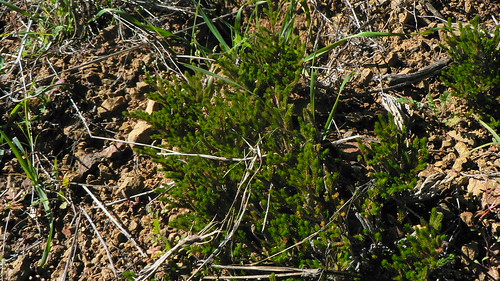 After our brief repast, DAW-G — still on point — scouted a viable route down to our target sycamores, and in little time we were crunching along the bottom of the grassy ravine, headed back to the lower shuttle vehicle. Great stuff!

Sometime in the late Spring I hope to relate more news with regard to this most excellent little route. 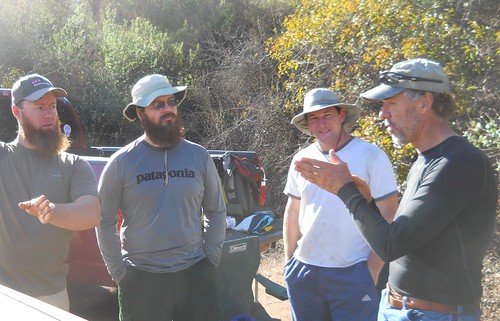