Return to the Pines

“My girl, my girl, don’t lie to me
Tell me, where did you sleep last night?”

In the winter of 2013 (you know, back when this stretch of the Los Padres still received on occasion this thing we once called “precipitation”), Trailmaster Cobra, the Cubmaster, and Bardlero Primero and I enjoyed a day trip to The Pines, that fine campsite a few miles above Thacher School. There my little wanderer of the wood utilized his fine fire-building skills and generally had an awesome and memorable day.

That trip proved something of a watermark for my son’s appetite for the backcountry, and over the course of 2013 he and/or his big sister joined me for numerous trips, among them the recovery of the abandoned Three Pines campsite, an ice-blasted Easter escape to Kings Canyon NP, the annual Spring retreat to the Chumash Wilderness, loops along Fox Canyon, more Chumash Wilderness backpacking, the exploratory down Salisbury Canyon Wash … not to mention monthly adventures with Scouts, frequent fishing trips, and numerous other adventures. It was a good year for the Carey Exploratory Corps. Little Man alone logged over 15 nights on the ground and about 80 miles afoot.

On the Hunt for Three Pines | Spring 2013 | Photo courtesy and © Bardlero Primero. 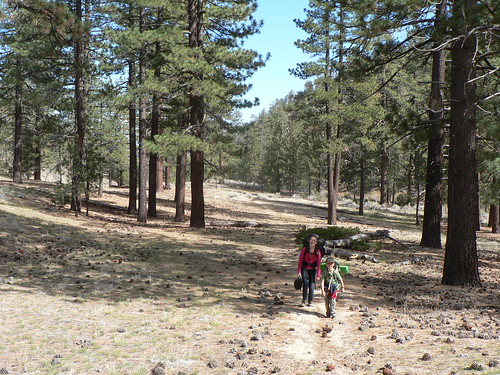 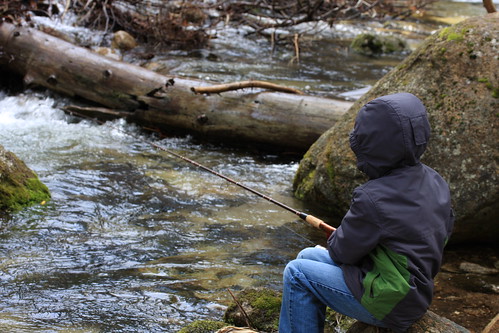 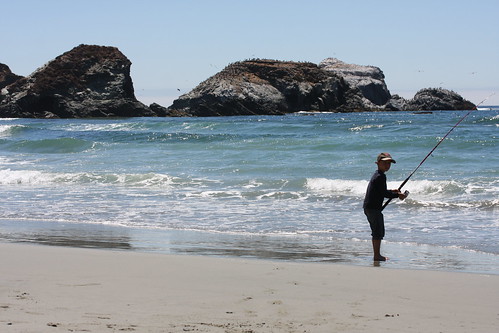 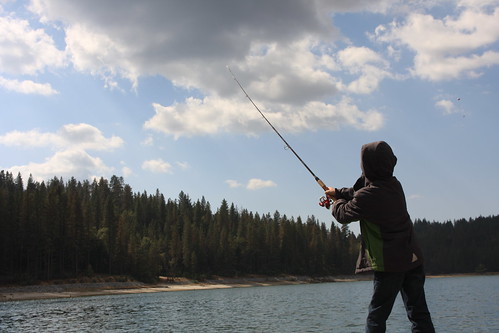 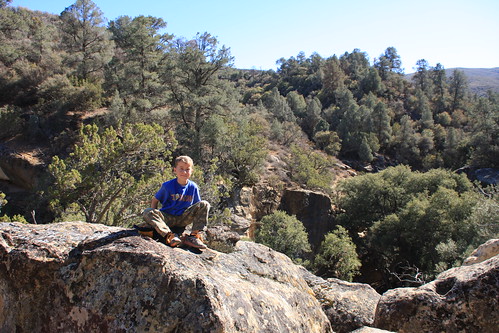 So as 2013 crawled to a close with 83-degree Christmas Day surf fishing afternoons and warm nights playing board games, I queried the little man what he’d like to do to close out the year.

And so with two of the pack at his heels, in the last week of 2013 Trailmaster led the way up Horn Canyon, intent on a night of whittling, sleeping under the stars, and general lounging. 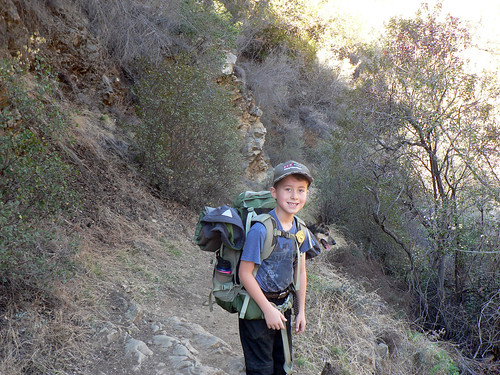 The first crossings were bone-dry, of course, and only a slight trickle greeted us at the fourth crossing. We snacked, chatted with a fellow Ojai RD volunteer who was also hiking the route that day, and let the dogs drink their fill before endeavoring to labor up the mile-and-a-half ascent to that lovely little copse of Coulter pines. 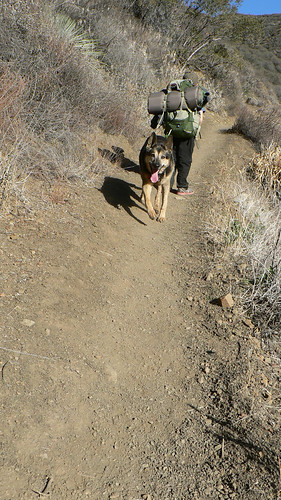 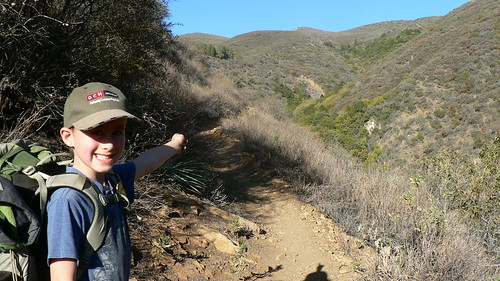 We reached camp with time to spare, and so I left it to the little man to lay the fire (our narrative is set, thankfully, during that all-too-brief window when fire restrictions had been lifted). I laid out the bedrolls and lit the stove for some hot chocolate. 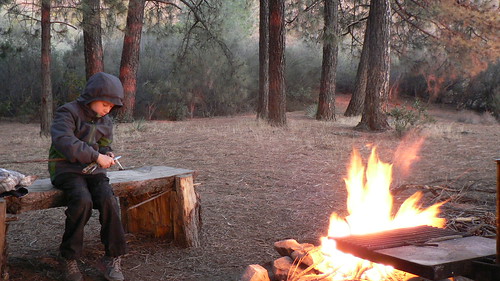 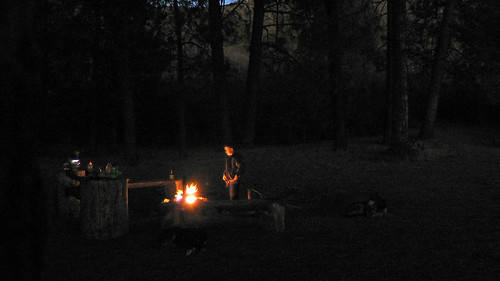 Not long after we’d eaten our share of macaroni and cheese and hot dogs and the dogs had gnawed their frozen rations, Trailmaster declared he was ready for slumber. Immediately upon crawling into our bags the dogs took their traditional positions, the uber-hund curled into a ball in a warren of her own digging at my feet, and Mad-Eye on the length of sleeping bag the little master’s body — at his age — has yet to fill. 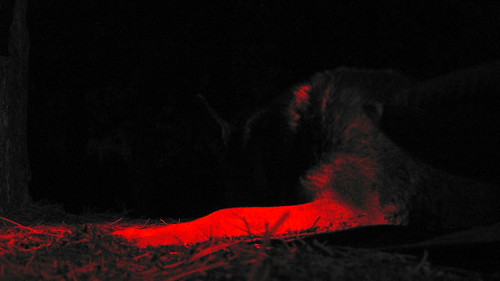 I must have dozed off rather quickly, as it seemed only moments later I was jarred awake by a loud “WOW!”

Me: “You okay?”
Trailmaster: “That was a HUGE shooting star!”
Me: “Cool, buddy. Night now.” [roll over onto my other side, and apparently fall back asleep]
Trailmaster: “COOOOOOL!”
Me: [jarred awake again] “What?”
Trailmaster: “Did you see that one?”
Me: “No, I was sleeping.” [dramatic sigh] “Okay, let’s see what we’ve got here.”

I rolled onto my back and stared through the Coulter boughs. Nary seconds later a huge yellow-orange streak raced eastward across the sky.

The next morning, Trailmaster got the fire going with of course no matches, and in short time the bacon was frying. We had some visitors pass through camp while we packed up, and after stocking up with water and some idle camp lounging, we were back on the trail. 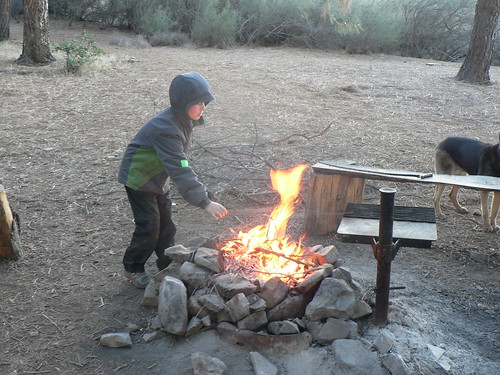 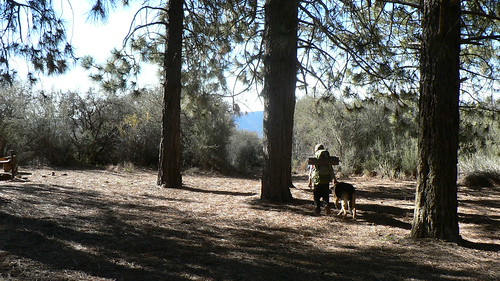 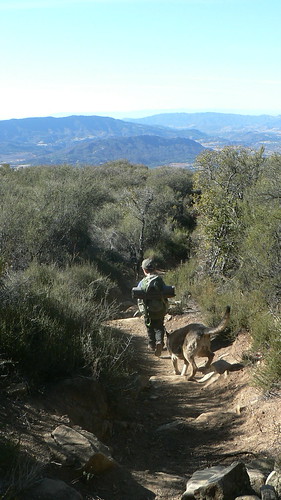 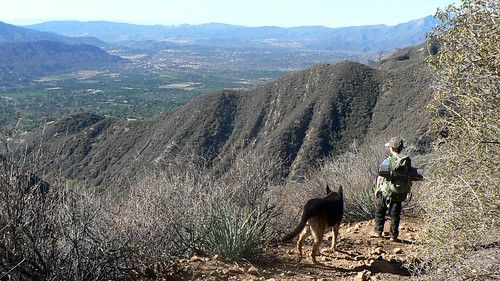 When we reached the traditional fourth crossing downstream from what Fred Volz called the Birdbaths, Trailmaster took time to further explore the area we call The Bramble, which is in turn downstream from the crossing. He and some of his fellow Bear Cubs had explored it a month previous, and he was interested to “learn more of its secrets” … whatever that means. He and the dogs had a fine time scrambling through that thicket of Brer Rabbit habitat. 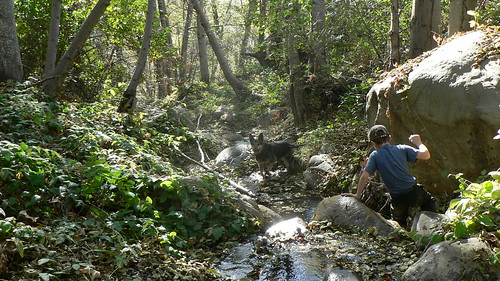 We trekked out of Horn Canyon right about noon, and enjoyed a traditional victory beverage at Full of Beans.

Not a bad way to close out the year … not bad at all. 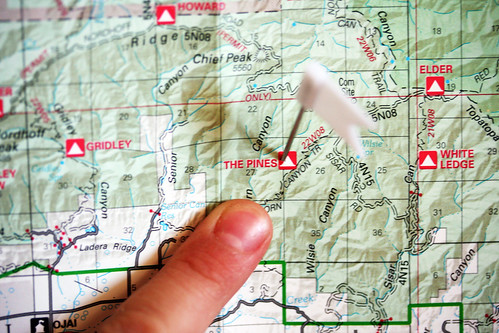 This entry was posted in Uncategorized and tagged backpacking, horn canyon, los padres national forest, the pines. Bookmark the permalink.

One Response to Return to the Pines