While the crybabies in Washington pouted, we went a’walkin

A few months back my fellow wanderer of the backwood Bo — whom I met in Boy Scouts — and I hit upon the idea of organizing a reunion backpacking trip for all the old hats from our days as rowdy young Scouts. Naturally, we (I?) chose Sheep Camp as the destination for a fine weekend in October. 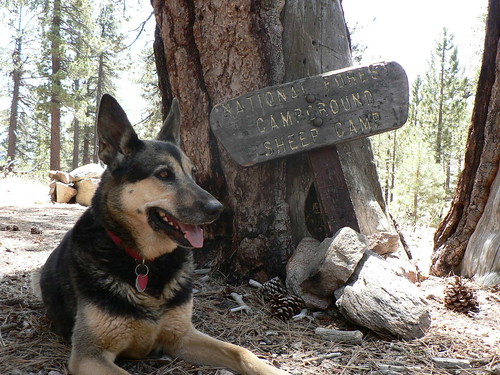 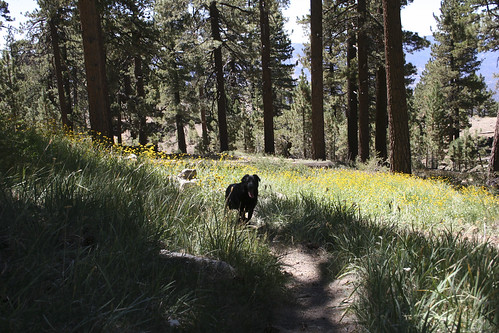 Anybody who reads this obscure little blog about obscure little corners of our beloved forest knows I have a soft spot for Sheep. Highest camp in the forest (8200′). My wife’s favorite. Arguably the pack’s favorite. Reliable water, even at the height of a summer drought. Conifers and easy navigating and geology a’plenty. Yeah, it’s a pretty easy choice. So with a small crew RSVP’ed, we rendez-voused at the Chula Vista parking lot one recent Friday evening to catch up with the guys with whom I’d trekked the Sierra, Philmont Scout Ranch, this area in the years before it was wilderness, and countless other corners of the wild over the years. 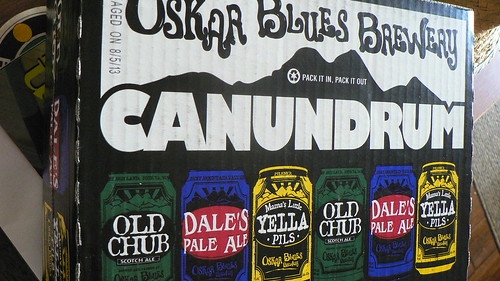 Overnight temps were forecast for the low 40s, and I’d packed a case of beer (yes, only one this time). The other hikers had come similarly prepared. With young Trailmaster Cobra and the uber-hund joining as part of my extended party, it was looking like the perfect weekend. Our arrival at Chula Vista required something of an adjustment, as it was a good 15 degrees cooler than predicted with some serious winds kicking up. 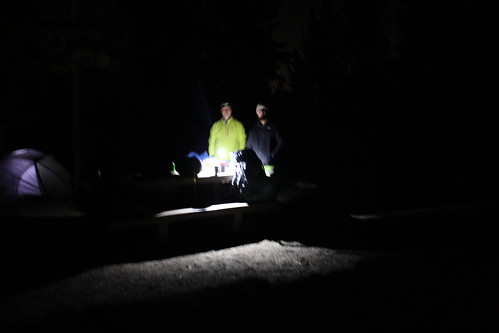 Little Man sacked out quick that night, and we followed suit shortly. Our evening slumber was only broken by the uber-hund alerting me to a lost camper who inadvertently stumbled through our camp in the dead of night. With a dim headlamp, his view was likely limited to a shadowy figure and a muzzle full of teeth at 0300. Something I’d care to encounter at such an hour? No, no it is not.

The next morn, I kicked the ice out of the uber-hund’s water bowl, rewarded her earlier diligence with an extra half-pound of steak for her morning ration, and we hauled our bedding back to the trucks, where on the RSO’s tailgate we lit the stoves for coffee and the traditional bacon and eggs. We chatted briefly with the gent whom Masha had “greeted” earlier that morn, and then we were off. TO THE HILLS! 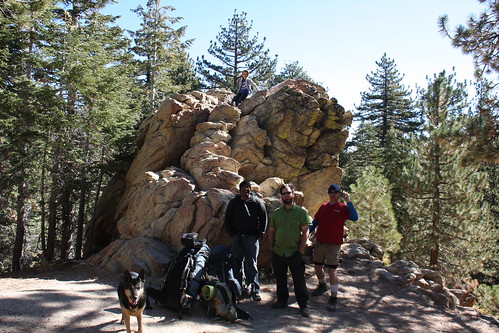 The last time half this crew had hiked Sheep Camp, we had driven the road one must now walk, and we’d done it in either my Mom’s (later my) ’63 Rambler American 440 wagon, or Mr. Allen’s old Chevy truck. The Vincent Tumamait Trail was known as the Pinos-Abel Route. And Cerro Noroeste was just plain ol’ Mt. Abel. You can make us walk it, and you can change the names, but it’s still the same route on which most of us Troop 143 kids cut our teeth. The route doesn’t change.

We took a leisurely lunch at the old condor observation area, and chatted with some day-hikers who’d just seen a bear on Sawmill Mountain’s eastern flanks. Excited at the prospect of seeing his first bear in the Los Padres (apparently all the National Park bears don’t count), Trailmaster Cobra convinced us to hurry it up and get a move on. For several weeks leading up to this trip he’d been especially keen for the hike to Sheep. Goodness knows he’s heard enough about it … it’s nearly the Carey family summer home, and somehow in his long seven years he’d never been. Further, he knew his big sister had already done it three times — including her first as a four-year-old — and that I imagine factored as well. 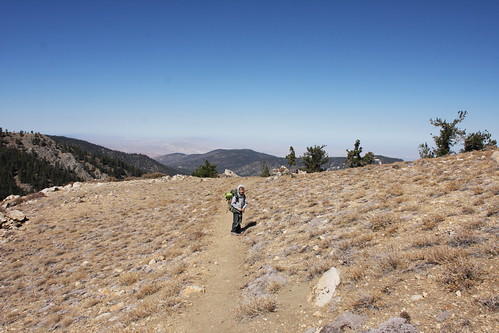 We motored down the slope to the Pinos-Sawmill saddle, pausing to take all the requisite photos, and keeping an eye out for any ursine wanderers. The uber-hund did pause at one point to sniff the air, her hackles slightly raised, but nothing more came of it and it was an uneventful stroll across the spine of Sawmill and down into the junction. 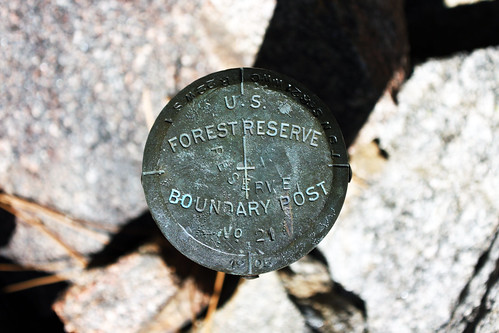 And while we had seen numerous day-hikers along the first two miles of the roughly 4-mile hike, once we entered the wilderness we spied precisely zero other travelers. The only other company we encountered was a solo backpacker and his dog once we’d dropped into the highest of the Sheep campsites. Continuing on, we dropped our packs at the third site and enjoyed some well-earned lazing about. It’s pretty amazing how little work camping entails when you needn’t (read: cannot legally) cook your meals. 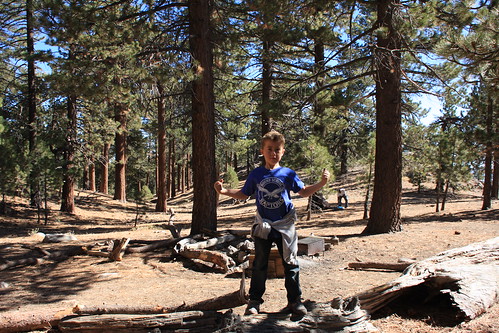 I Run this Camp. 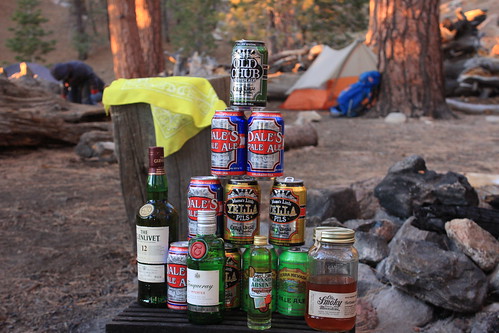 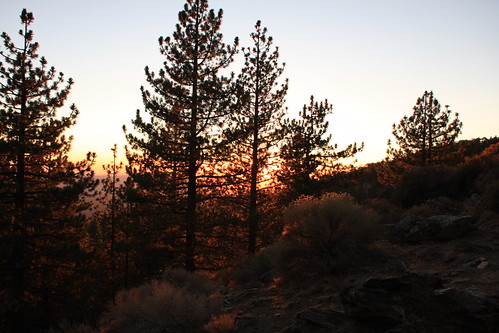 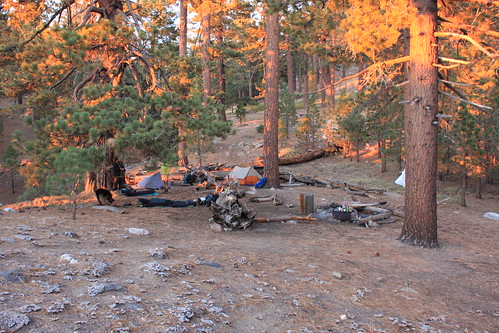 As the sun sank, the uber-hund dug herself a small bed just beyond my and Little Man’s and the RSO’s sleeping bags, and enjoyed herself a long nap. Being now the elder statesdog of the backwood is tiring, I’m sure. And now nearing 12, she needs an extra nap or two when she can get them. 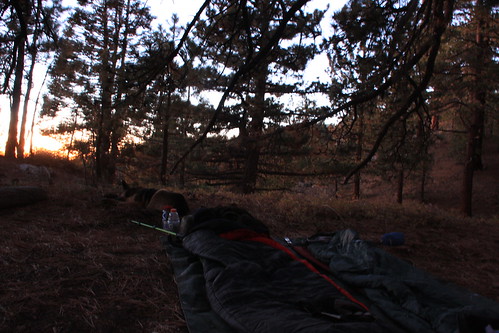 Likewise, Great Scott! sacked out some time later after lounging with us and soaking up the glory that is Sheep Camp. He was stoked to have made the trek back to the Los Padres from Texas, and who can blame him. Little Man sacked out shortly thereafter, his canine guardian re-positioning her bedding to keep on eye on her diminutive charge … and then the RSO and Above the King and I stayed up entirely too long imbibing entirely too much of the shared provisions long into the night. 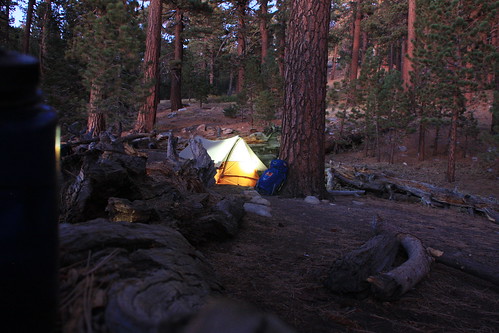 We slept really well that night, with full bellies, warmer temps, lighter wind, and the uber-hund ever-vigilant. The next morning we tested the RSO’s new Sawyer squeeze filter (approved), and eventually enjoyed a leisurely saunter back to the trucks. The Little Man smoked it, and I think we four adults were all a bit sad to leave the wilderness and return to our respective duties in civilization. 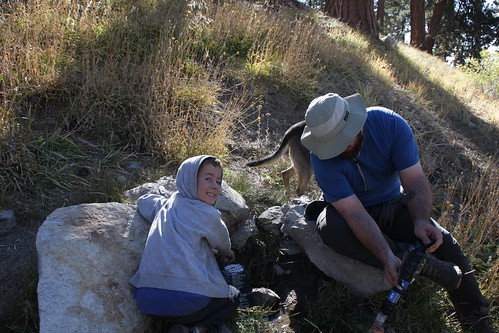 But we’ll be back. We always are. 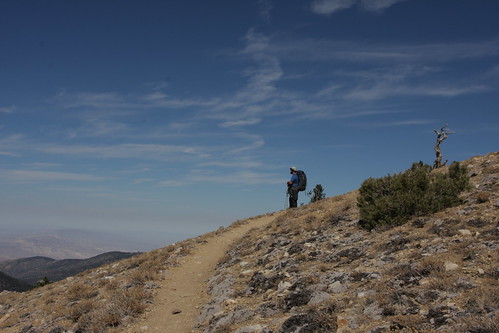 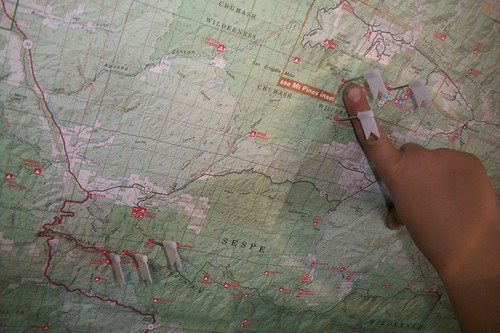