The current issue of the Sierra Club’s Condor Call carries a short article about the Cuyama Peak Lookout tower I wrote for the regular “Soaring the Los Padres” column. Every other month, this column details the great work being done by the Condor Trail Association and some of the features along the Condor Trail. You can view the article here, but for your added convenience I’m also including it below.

One of the many attractions of the Condor Trail’s southern section is its proximity to Cuyama Peak, the 5883-foot promontory just north of the Dry Canyon section of the through-trail.

Cuyama Peak has in the last few decades been home to one of the few remaining lookout towers in the southern districts of the Los Padres National Forest. Sadly, the tower’s cabin here has finally succumbed to age, collapsing in early 2012.

Built in 1934, the Cuyama Peak lookout featured an H-braced 20-foot tower with a 14’ x 14’ cab; in this regard it is nearly identical to the Thorn Point lookout. And like Thorn Point, the Cuyama Peak lookout was also accompanied by an Aircraft Warning Service cabin during the World War II years. (The Cuyama cabin has in recent years also collapsed after more than a half-century of wind and weather, leaving Thorn Point as one of the few pairs still standing.) 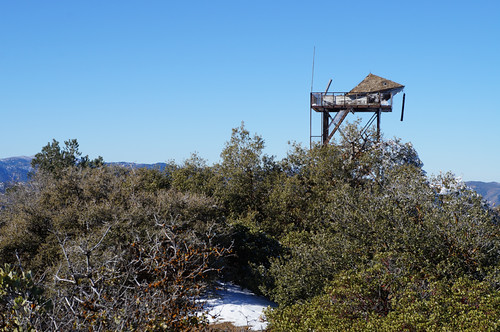 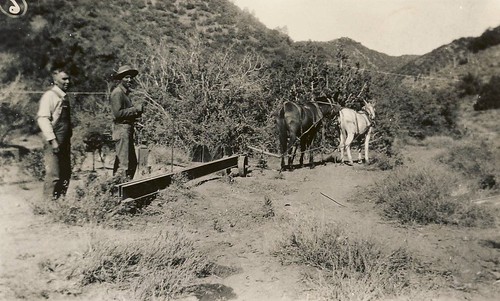 The Cuyama Peak lookout’s cabin (above) survived until just last year when it collapsed. It was built in 1934 when all the materials were hauled up to the site, as shown in the bottom photo. (Top photo by David Stillman, bottom from LPNF archives).

In the 1990s and 2000s, the Cuyama Peak lookout had been used as a vantage point for those studying the local condor population; the peak’s proximity to the Bitter Creek National Wildlife Refuge as well as the nearby Sierra Madre ridge makes it an opportune point from which to view the endangered birds.

But because Cuyama Peak is also accessible to automobile traffic, the immediate area was often (and remains) littered by the detritus of lax target shooters and people indifferent to the litter they leave behind. The danger of such micro-trash to condors is well documented, and the Los Padres ForestWatch organized a microtrash clean-up here in 2008.

Now with the cab collapsed, the Cuyama Peak lookout’s deterioration is sure to only accelerate, and in time only the tower superstructure will remain, as at Nordhoff and Topatopa Peaks.

If you’ve not seen one of the historical lookouts in the Los Padres, go now … only a handful of the old guard remain.

Craig R. Carey is frequent wanderer of the Los Padres backcountry and author of Hiking & Backpacking Santa Barbara and Ventura

(Wilderness Press, 2012). You can read his idle musings at www.craigrcarey.net. 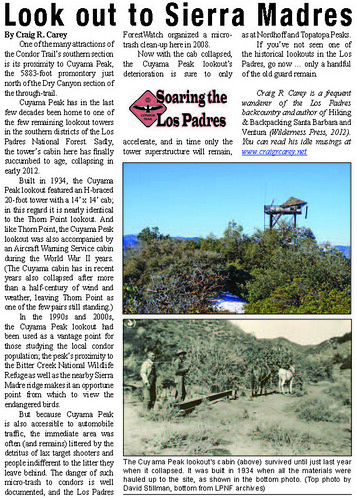 One Response to Condor Call February/March 2013