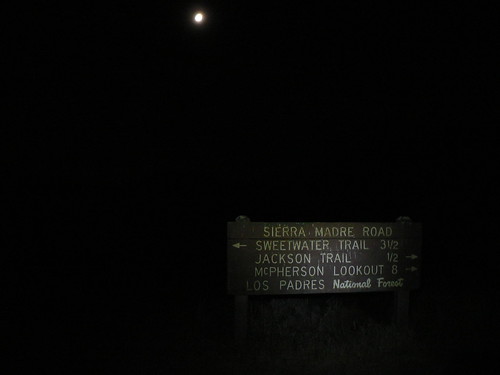 We hit upon the idea of doing some night-hiking after being nearly cooked on the previous week’s descent of Buck Creek.

Not anxious to beta-test this new approach along any stretch of single-track we’d not trod previously nor hike something we’d done in the past few months, we agreed a traverse of the Sierra Madre — from Highway 166 to Santa Barbara Canyon — would be the most prudent choice. The first 32 miles we would drive, scouting Miranda Pines and other points along the way, and then hike at least those first six miles from McPherson Corral to Montgomery Potrero under the light of the moon.

And so after the almost-ridiculously long drive along the Sierra Madre Road, we arrived at the McPherson Corral shortly after 2130. We sorted gear, lit the headlamps, and under an increasingly-bright waxing gibbous headed east along the road.

The going was easy; aside from some clouds looming over Mt. Piños and the San Emigdio to the east, our sky was clear and the moon alone provided nearly enough light for us to navigate the ridge-top road. Grasshoppers were startled from their resting places and various bugs revealed reflective qualities of chitin previously unknown to us as we followed those easy miles down into Montgomery Potrero.

We put the kettle on and then threw the beds down in a small flat beside the table sometime before 0100. With no real agenda and no set plan, we agreed tomorrow’s schedule would be in part determined by the heat, which was projected to be somewhere in the 90s. Fill the reserves bottles, explore the area, take photos, lounge, nap if we were so inclined … this was a very promising start to our nascent career as nocturnal trampers of the wood.