My hiking companions and I are cheap Caledonians, let’s start with that up front so nobody’s under any illusion. We don’t buy a lot of high-end gear, and with the gear we have we absolutely, positively and without question get far more than our money’s worth. Our gear lives a long and happy but extremely hard life.

But we also happen to have what we call a high find-to-mile ratio. On just about every trip we seem to find a new piece a gear. Sure, most of it’s small stuff, but it all adds up. We return the stuff we can (though I have better luck returning golf discs than camping/backpacking gear, I must concede), and most of it we leave at the next campsite for somebody who might actually need that set of tent stakes or teflon fry pan, but in the end our gear shelves are still populated by a lot of orphan gear.

Last month while we were braising lamb chops at Cienega camp, I noticed just about everything on the kitchen end of the table was from that proverbial bargain rack. GSI Outdoors nForm plate? Found that on a flat near the old Timber Canyon camp on the Sespe. Cutting board? On the old road heading out of Squaw Flat. Titanium spork? Found that in the spring at White Ledge camp in Sisar Canyon. (To round out the bargain theme here, the SVEA ZK was using to boil water he bought for $5 at the Salvation Army, and the kettle was a hand-me-down from my semi-retired Scoutmaster.) 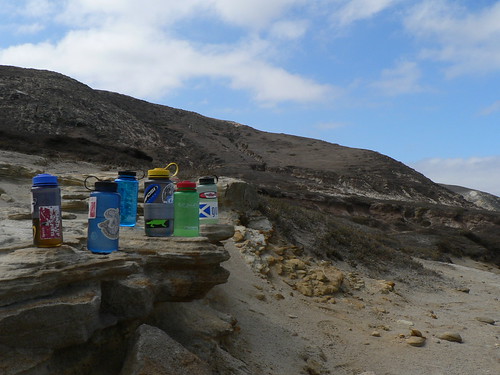 There was a rusting set of high-end hickory-handled carving knives somebody had dropped and left scattered at Manzana Narrows (we left 5 of the 6), a really nice Japanese paring knife at Santa Rosa Island camp, and a good Victorinox Swiss Army knife in the sand at the end of the West Coast Trail in Port Renfrew. A Black Diamond headlamp in the brush north of Mesa Spring. Seven Nalgenes (and counting), sourced from everywhere from the North Fork of Lockwood Creek to Kolob Creek out in Zion NP to the G train in Brooklyn. The list goes on.

So next time you lose something, don’t sweat it overly. Odds are we found it and that it’s now sitting beside the set of Spitfire broadheads and the Manfrotto camera bag here in the dungeons of maptitude.

6 Responses to Lost and Found