Diamond in the Rough: The “Other” Yellowjacket

It’s been a standing joke for some time ’round these parts — how there are in the toponomic scheme of things on the southern Los Padres a bevy of like-named locations.

One of those doppelgangers that’s always fascinated me however is the other Yellowjacket … not the one out in Grade/Mutau Valley, but one of the many sites on the San Emigdio Mesa that have inexorably been falling off the USFS inventory. Previous sojourns to other lost sites across the Cuyama badlands — e.g., Mud and Blue Rock Springs, Cienega (no, the other one) — punctuate the number of sites lost in this region alone. Never mind how many sites Forest-wide that are now abandoned, lost, or forgotten. The narrowing number of “official” sites makes a quiet weekend of car camping nearly impossible for we misanthropes, and the visitor density at the few remaining sites — further compounded by higher fees for fewer services, and payable to concessionaires — makes camping difficult for even the most casual car camper who might want to bundle his or her kids into the trucks and enjoy a quick night out. These are sad times for our beloved public lands.

My folks had camped at Yellowjacket (and Mine, and Cow Springs, and countless other now-closed or less-accessible sites) in the old Bronco in the late 60s shortly after their arrival in Ventura County and long before my entry into the world; the camp had been mainly a cartographic curiosity to me until a few years ago the Three Kings forwarded a few enticing photos my way. 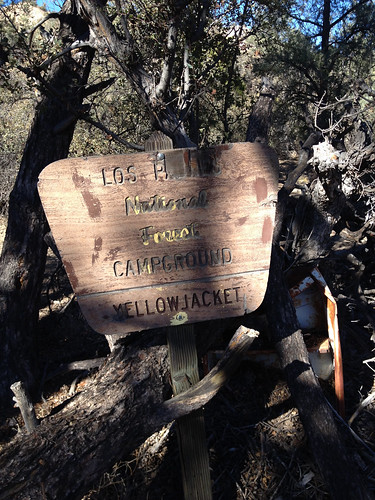 The photos shared showed a classic routered wooden sign, ice can stoves in near-perfect conditions, picnic tables, and various accoutrements about camp. And so Yellowjacket went onto my “to-do” list that very day.

But as we well know, items registered therein can languish for years before finding themselves the next actual “to-do.” But Yellowjacket’s time had finally come! And so it was the clear morning after Christmas the wee ones and I bundled into Ol’ Bessie with our day kits and two of the pack. Little Man’s new hound — a rescued Belgian Malinois he’s named “Scout” — is still a bit wild, so we felt heading into these largely empty lands to be another good opportunity to work on the dog’s outdoor manners and response timing. 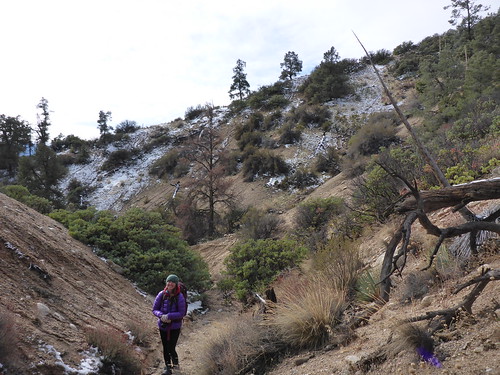 There was a thin crust of ice covering the floor of the obscure drainage I’d selected from the old topo sheet as we started our scramble away from the rig; Scout was thrilled to be “free” from his leash, tearing up side canyons and chutes only to come racing back to check on his bipeds, inadvertently introducing his nose to yucca once, and experiencing his first snow along the shady bends. Lilly — now a seasoned forest-goer and in the wake of the uber-hund’s retirement our de facto elder statesdog, pretended not be impressed. She kept mostly to Li’l G’s side or would on occasion round on Scout to keep him in check. (Even by December 26 her Christmas cheer is always long gone.) 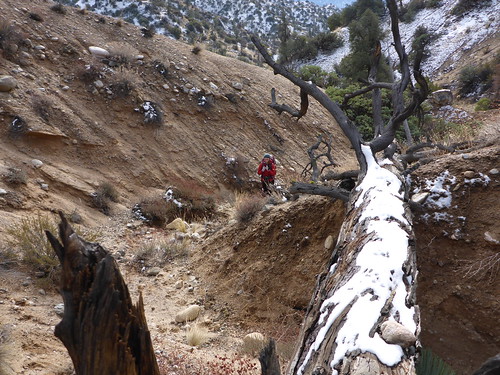 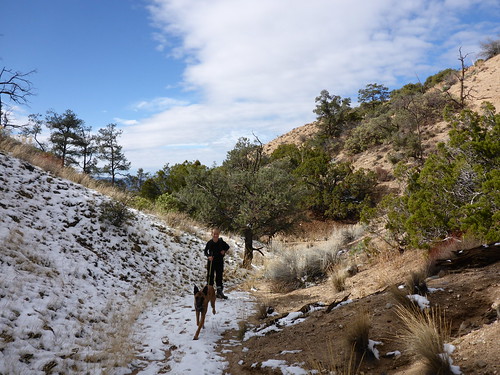 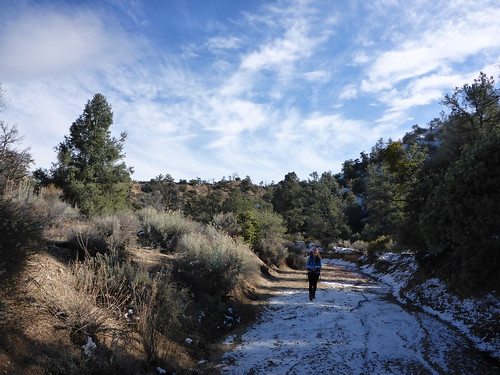 About a half-mile from where I’d estimated Yellowjacket to be, we leveraged a bit of Pythagorean theory and cut straight across a wide ephedra-dotted expanse rather than continuing down the drainage to meet the more obvious tributary. Thus far we’d seen no sign of humans — no litter, no spent shell casings, no footprints. It’s a rare sojourn into any area so near the main thoroughfares where that can be said. 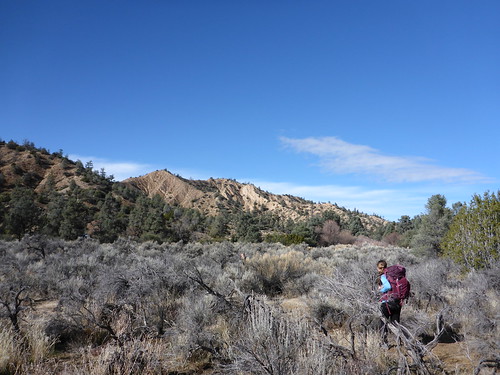 Soon enough, our lucky streak ended, but in an entirely palatable way. A series of heavy posts began to follow the edge of our drainage, with the stray occasional piece of fencing wire attached. As we re-entered the cover of oak and pinon, the gurgle of flowing water greeted us. 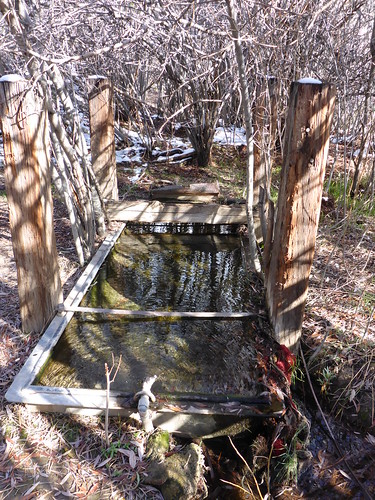 Local lore holds that this spring-fed cattle trough once held goldfish introduced by some long-forgotten visitor, and that even when the trough froze over the fish persisted … swimming circles near the bottom. Alas, such hearty carp were not to be witnessed this day. 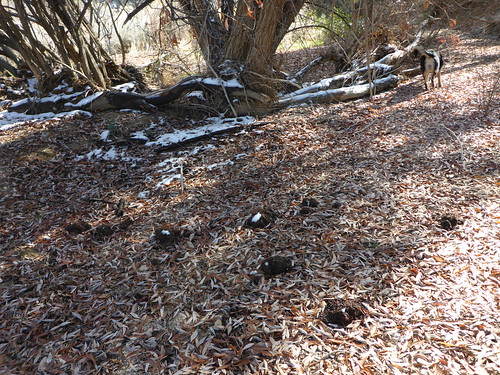 From the spring and the masses of bear scat beneath the adjacent willow, it was a short walk up-canyon to the site of the old car camp. Little man was fascinated by the old washing machine, ice box, and enjoyed reading through the register. The modern relics of real interest, however — namely the old sign and the ice can stoves — had since been lifted by some treasure-hunter and surely reside in some suburban garage or back patio. 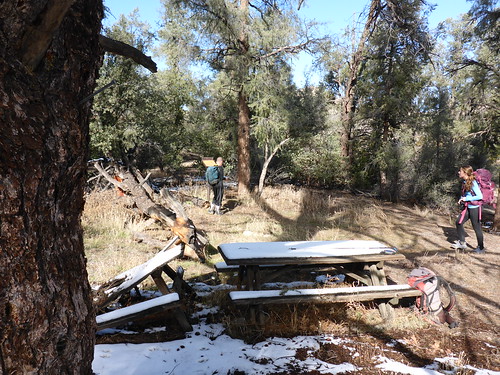 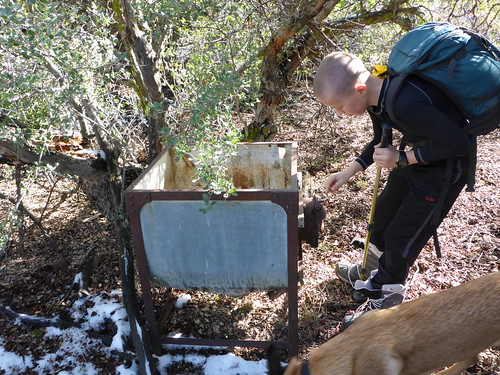 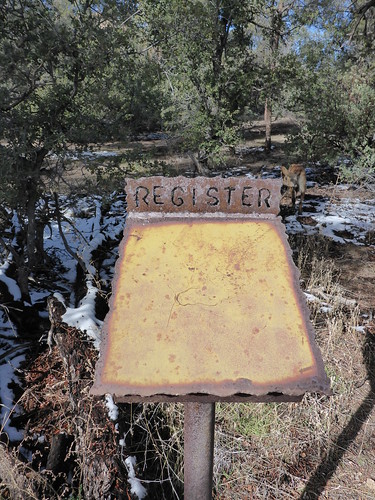 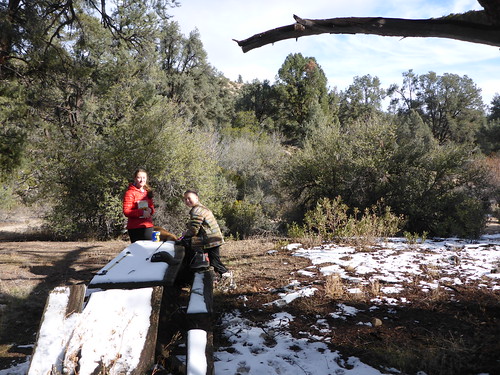 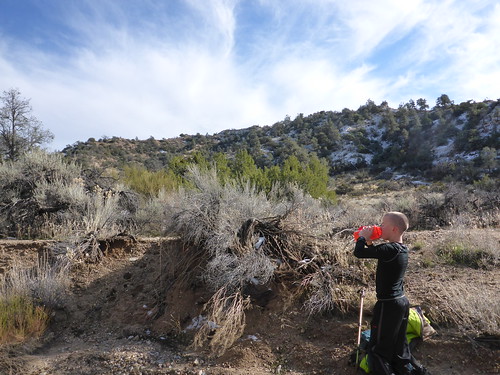 After a leisurely lunch and much picking around, we finally shouldered our packs and retraced our route back to the truck. As we topped out along the last ridge of the drainage, the little ones took a brief pause to soak up the views as temps dipped back into the 30s. It had been a perfect day of wandering a forgotten corner of our big backyard, but tri-tip sandwiches at the Reyes Creek Bar & Grill and the promise of the truck’s heater beckoned them down the mucky slopes. 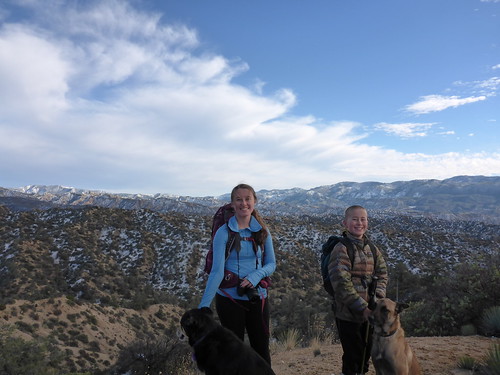 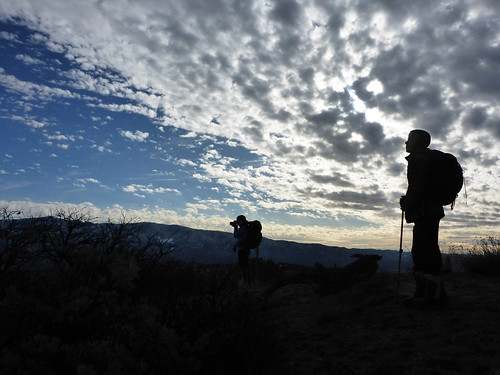 3 Responses to Diamond in the Rough: The “Other” Yellowjacket