Late last year, I stood in the back of a local elementary school cafeteria during a Cub Scout meeting. The different dens (organized by school grade, first through fifth) were taking turns telling the other Scouts and parents in attendance what their dens had been up to that past month. Trip to the fire station, a hike in the city park, making peroxide-and-baking-soda volcanoes … all the great stuff Cubs enjoy.

When it came time for the crew of Cubs I help lead to share their experience, I had that usual swell of pride I always feel for these fine young men. Great speakers, confident forest-goers, thoughtful citizens. I waited for them to extol unto the crowd their most recent outing had removed hundreds of pounds of debris from an illegal target-shooting area, how they’d identified several invasive plants in the watershed and reported their findings to the Forest Service biologist, or perhaps brag a bit about being only 10 or 11 and cooking all their own meals. (You know, the usual.)

So our most fearless speaker — who shall remain nameless — took the mic, and to collective gasps from grandparents and little siblings alike excitedly announced “We found a marijuana plantation in the forest. There might have been booby traps!”

So let’s start at the beginning, shall we?

This story really should start thusly:

Late last year, I led my Cub Scouts on one of their last public lands service projects before most of them were to make the big transition to full-fledged Boy Scouting.

This project — staged in an unnamed but oft-traveled tributary of the Sespe — was intended to occur in two parts: a shooting-area clean-up on Saturday (please, do appreciate the great irony of 10-year-olds picking up after grown-ups here), and then — for some older Scouts and bioscience students from the local high school — a search-and-geotag project of tamarisk in the numerous branches of this creek (which had been the target of several eradication projects led by LPFW and Keep the Sespe Wild in previous seasons).

Naturally, nearly all the Cubs who volunteered to join the first day’s project were keen to stretch their weekend in the backwood as far as they could. They have tried and true tactics, these kids:

“Mr. Carey, after we clean up all the bullet shells, can we go exploring?”
“Sure.”
“Hey Mr. C., can we ‘gorilla’ [guerrilla] camp in the meadow afterward? And make it a backpacking trip?”
“Sure.”
“Mr C., could we leave Friday night instead of Saturday morning? Night-hiking would be awesome!”
“Sure.”

(As you can tell, I’m a strict by-the-schedule sort of leader. Adaptability is so over-rated.)

And so what I’d organized as a 4-hour Cub Scout project for the US Forest Service on a Saturday and 6-hour high school project on a Sunday turned into something a bit different.

Most of the crew went for the extended addition: with a few LPFA-trained VWRs along to assist, we leaders ushered an adventuresome crew of 5th-graders up the drainage under lamplight. It was breezy, and got cold quickly … precisely not the conditions to discover that somewhere along the way I’d sliced open my air mattress to such a degree all the patches in the repair kit wouldn’t come close to helping. 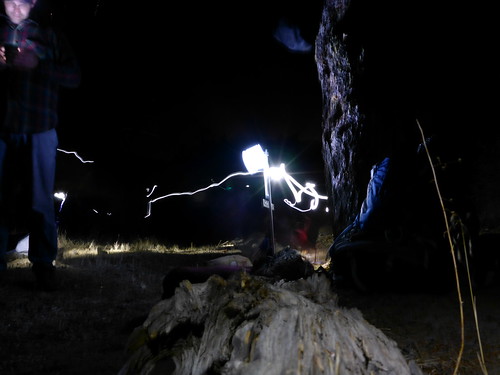 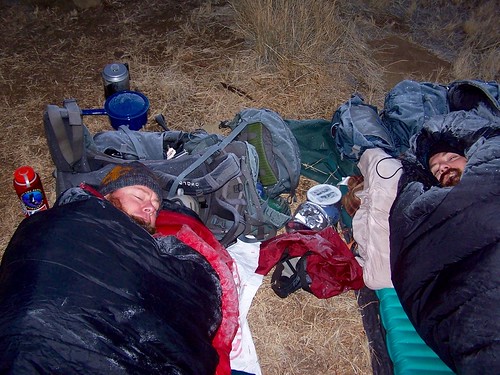 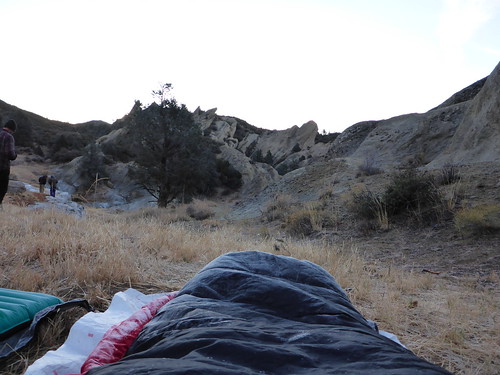 It was some cold hard ground that night, and temps dipped to 11F. I was glad to get up and get the day started. 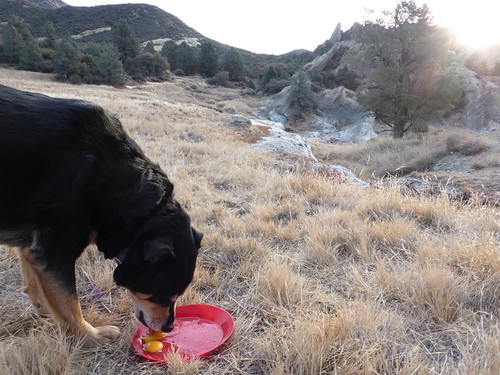 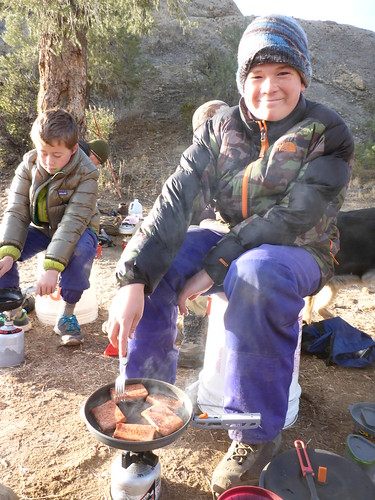 After breakfast, the crew headed back down to the highway, where we met with the day-tripper portion of the volunteer crew and together headed up to the shooting area. The crew was diligent and scoured the shooting area for spent brass, blasted PC monitors, well-ventilated propane tanks, and sundry detritus strewn across the canyon. They perform this work with an attitude balancing on disgust and resignation sometimes, and I can’t blame them. It can be pretty disheartening to see how immature “grown-ups” can really be. 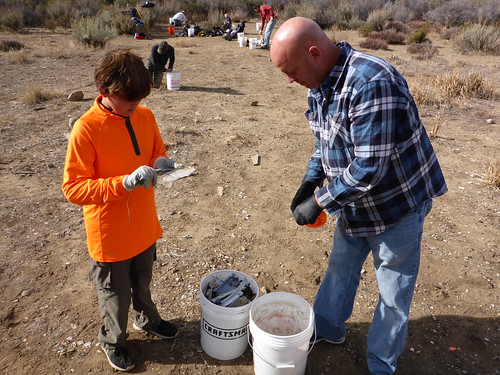 The team also worked the upper canyon, retrieving more shell casings and litter along the drainage, and hiked it all back down to the trucks parked along the highway. It was a great day of service for the day-trippers, and a fun region to explore for the boys who took the “extended tour.” 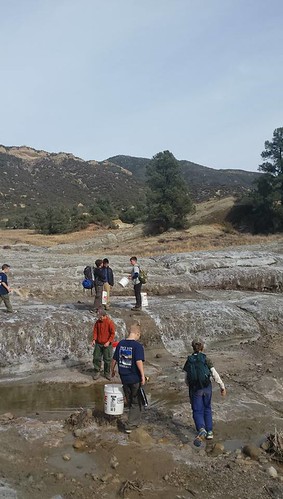 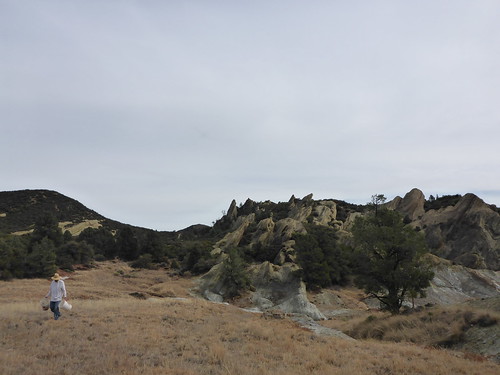 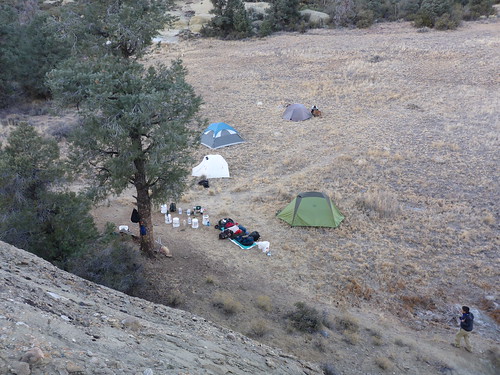 The next morn, a core group of Cubs and I headed back down-trail to meet with the older volunteers. We then hiked to the location of where tamarisk are known to thrive, and taught the crew how to identify the invasive and gave a short clinic on geotagging using a GPS receiver. 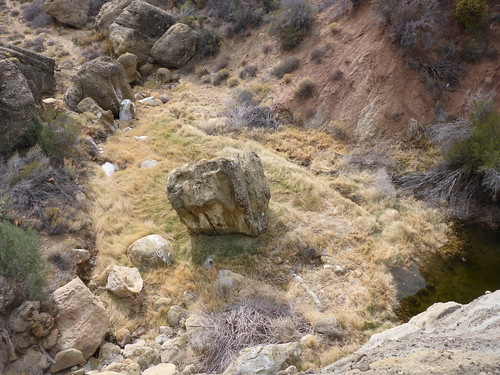 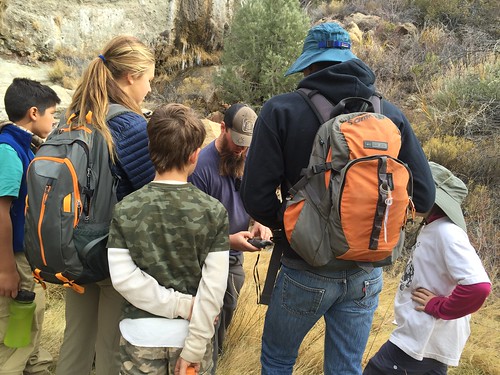 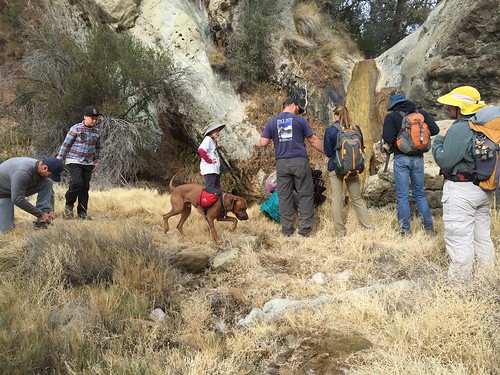 There are — from a point just above the main falls and pool in this canyon — three main tributaries. We resolved to explore these drainages as far as practical in the half-day or so we’d allotted and see if we couldn’t locate additional specimens of tamarisk. We first headed westward, pushing through the dense chaparral and dodging yucca along the drainage (the first section of which had been the focus of another LPFW project the previous year). It was a grand time navigating the brush and growth and sundry obstacles. The Cubs especially made a fine game of it, bouncing off the rocks like little pinballs possessed. The older Scouts and students were a welcome addition, lending a bit more levity to the actual search for any possible tamarisk. 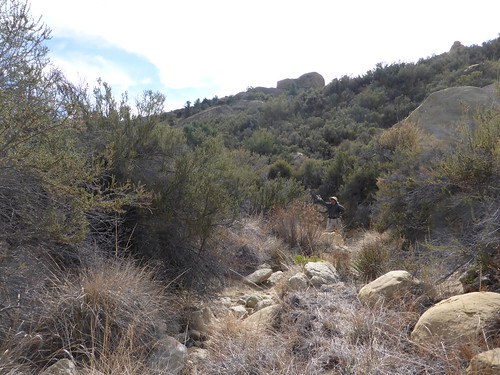 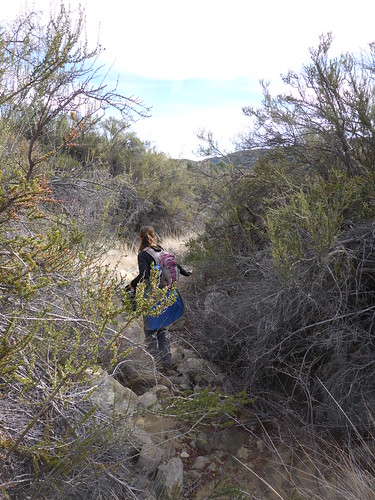 On the second drainage, we headed northward, following a long, fairly open space along what had looked like a hunters’ trail on Google Earth, checking in minor tributaries on our left and right as we headed upstream. I was knee-deep in some sort of tussock when I spotted a beer can. We were still ridiculously close (as the condor flies) to the highway, but remembering the Sam Young Canyon pot grow a few years previous, I figured it best to advise the boys to hold back a moment. I inhaled to send forth the word, and —

We pulled the boys back down from beneath a stately live oak, and I with two of my more imposing co-leaders checked the area. It was all the usual junk: dozens upon dozens of Bud Light cans, instant soup containers, empty bottles of Tapatio, pesticide containers, and a ridiculous amount of litter … all well-hidden beneath the shade of this tree, the branches of which he been trimmed well enough to allow standing room. 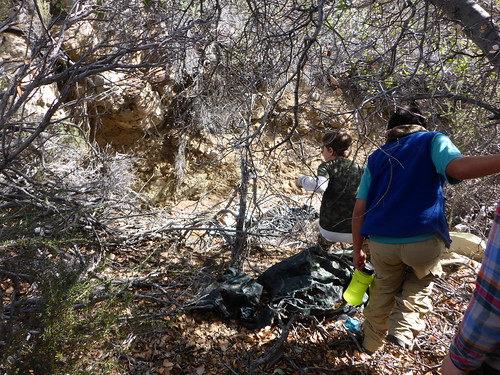 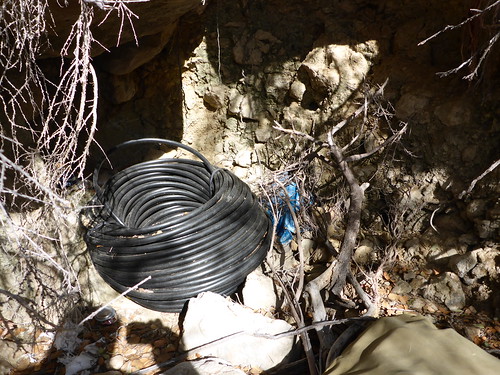 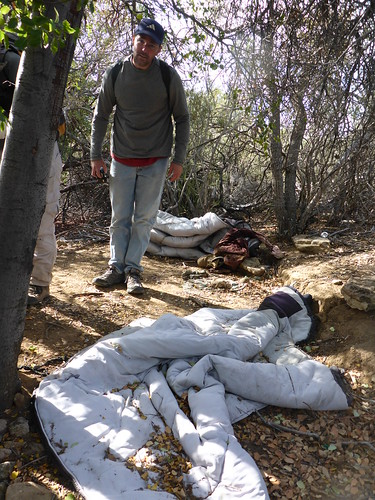 Once we determined the site had been long-abandoned, we brought the Scouts and students back up and gave a short talk about the impact of the illegal marijuana trade on our public lands, how it was contrary to the Leave No Trace ethics our unit strives to uphold, and the like, but I rather suspect some of the boys — ardent capitalists — were trying to figure out how to haul the 5 or 6 bags full of beer cans out to the nearest CRV center. 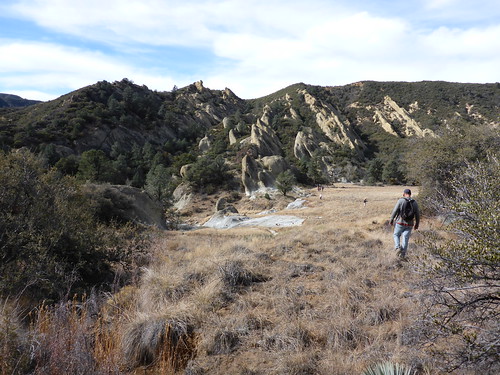 We enjoyed a brief lunch back down at our makeshift camp, and then headed eastward along the third and final drainage. And there, growing rather happily among the Incense-cedars and Douglas firs, we did find a few tamarisk, which the students dutifully recorded. 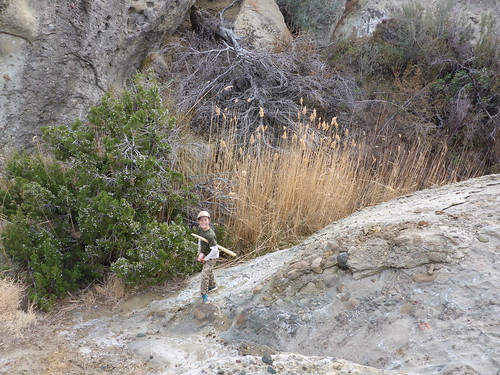 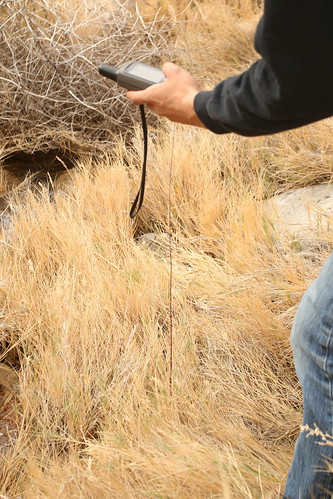 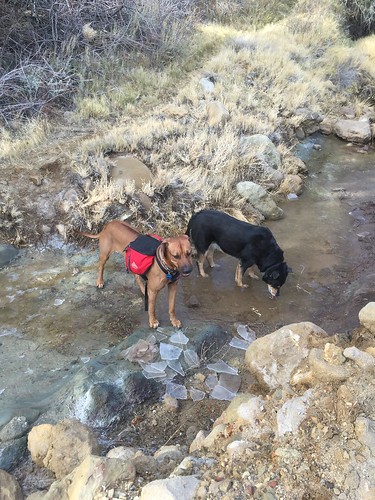 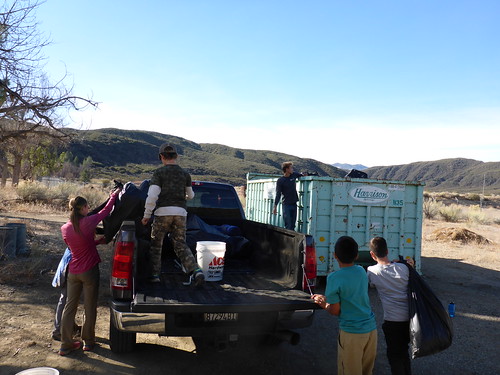 Another great weekend, and one that ensured — once I calmed the parents — that the boys had a story to tell when they get home. 😉

One Response to 11 Degrees of Service