I’d been up Lion Canyon just a few weeks prior, looking for a Depression-era diversion dam that I believed had been used to supply water to the old CCC camp at Piedra Blanca (aka Lion Camp). And on that day the cobble-strewn creek had been a dry, sorry affair. (You know, like nearly the entire Los Padres backcountry is right now.)

During the visit, I kept in the back of my brain the fact I was also going to be leading a gaggle of Cub Scouts up this way shortly, and so I took note that the crossings were all easily navigable for their little legs, but we still had enough water in late February that they could enjoy some unstructured free time reveling in the swimming holes.

Then came the weather forecasts. The first said slight chance of rain. A few days later, that was upgraded to rain likely. A few days further, and it was just “rain.” I don’t honestly remember when the NOAA upgraded the forecast to “it’s gonna rain something fierce, son,” but I probably just missed it. The boys were excited for their big camping trip at Middle Lion and day trip to East Fork Lion Falls, and I was excited to share this great little corner of the Los Padres with them. 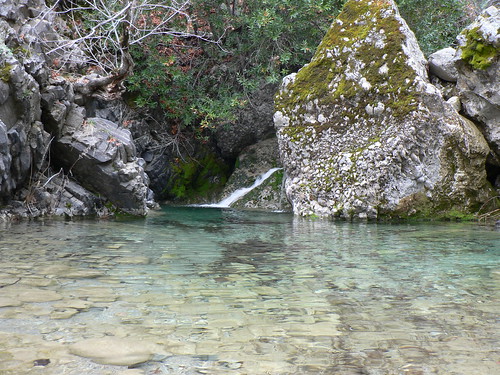 Somewhere around the time the forecast was again upgraded (this time to “hold on to your hats and send the women and children to high ground”), the voices of reason chimed in. Bardlero Primero, Moose, and sundry other back-country-hardened men calmly reminded me of folks throughout the ages who had underestimated Mother Nature, from Noah’s detractors to the would-be rescuers along the Sespe in the winter of 1969. I wasn’t fool enough to think I could outsmart the weather, but with the retreat plans firmly tucked into my back pockets, I gave this excursion the green light and we hit the road.

Trailmaster Cobra and I were the first to arrive at Middle Lion late that Friday afternoon, and the rain was intense. While we were identifying the best place to set up camp, we watched a pair of disturbingly large trees float down-creek, ostensibly recently plucked from their long-time homes.

In short order some of the other father-son combos began to arrive, and in short time the dads had a blazing fire issuing from the old washing machine tub. 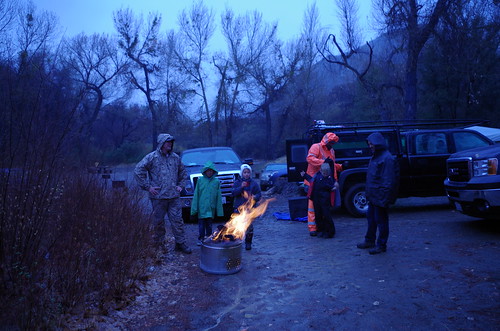 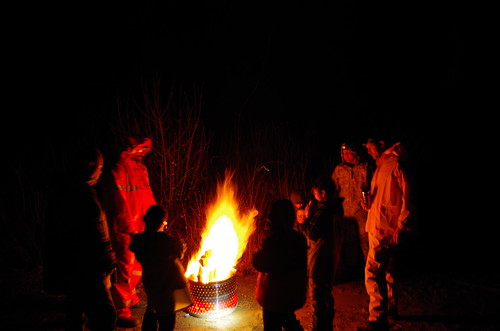 Tents were set up quickly, though some participants immediately deferred to sleeping in the camper shells of their respective trucks (a decision I agreed made a great deal of sense). Three families braved the rain and set up tight-as-a-drum tents … well, three of them until the run-off crashed through one of the tents and inundated a disproportionate amount of that crew’s gear (chalk up another pair sleeping in their truck bed).

Once the wee ones were all tucked away in their respective beds, we dads conferred and agreed that if the weather continued anything close to what we’d already experienced, we would effect an orderly retreat to drier climes, but we also agreed that any departure down the mountain roads at this hour would be folly.

We settled into bed in due course, and all night gusts of wind, crashing thunder, and great downpours shook our tents. We could hear the rocks crashing down on the 33 and Rose Valley Road throughout the night and wee hours of the morning.

We were up early — the rain was still unrelenting — and so we rigged a heavy tarp between two of the trucks to facilitate the cooking of breakfast. Hail showered down on us now and again.

After a very entertaining morning of bacon and eggs and hot chocolate, we got our gear packed up and let the boys view the raging torrent that Lion Creek — empty only days earlier — had become. 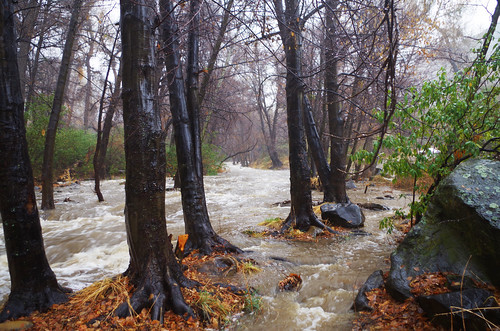 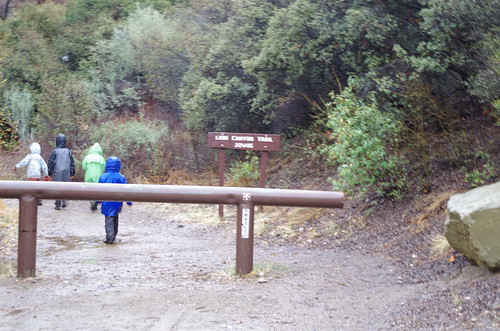 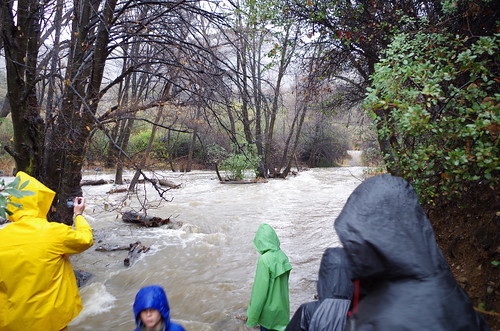 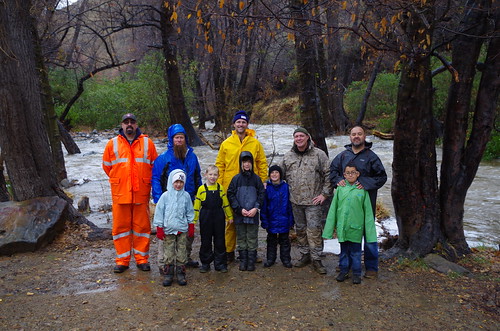 Once they were convinced they couldn’t build a bridge across, raft it, swing from tree to tree above, or swim across (mind you, these are 8-year-olds we’re talking about), we boarded the rigs and began the slow drive out. 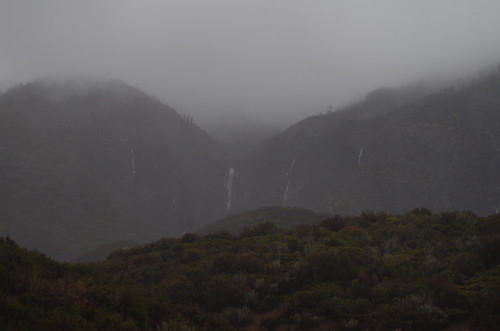 Rockfall, both downed and coming down, made for an interesting exit (Fixer’s truck escaped an ignoble hood ornament only by virtue of some USMC reflexes), and in short time we found ourselves being escorted by CalTrans, the highway having been closed the evening before at Wheeler Gorge. 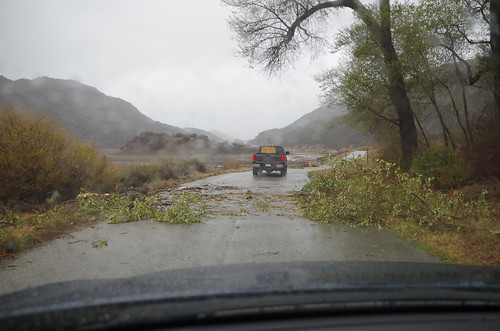 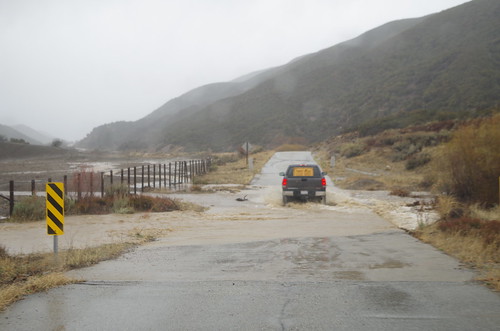 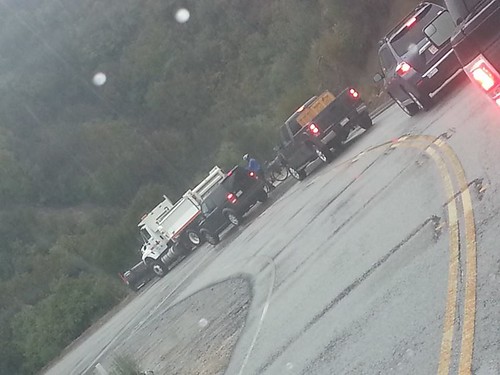 So with a caravan of soggy boys and even soggier gear, we figured they’d had their fill … but we were sorely mistaken. Our sodden Cubs and the boys who’d not been able to meet us at Middle Lion because of the road closure were adamant another night’s camping was still in order. (Le sigh.)

And so it was we dads found ourselves roasting hot dogs and being fed double-thick s’mores by our intrepid band of young adventurers (in the rain, again) beside the shores of Lake Casitas that same evening. 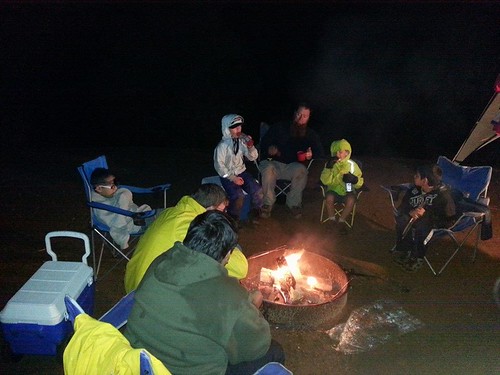 And there was not a word of complaint. These boys are hooked.

(Specifics re: the trail to East Fork Lion and beyond [which we’d hoped to hike] is detailed in Route 87 of Hiking and Backpacking Santa Barbara & Ventura.)

One Response to When Lion Roars