Another from the LPNF Archives, and one I’ve shared previously on the Condor Trail‘s Facebook page. 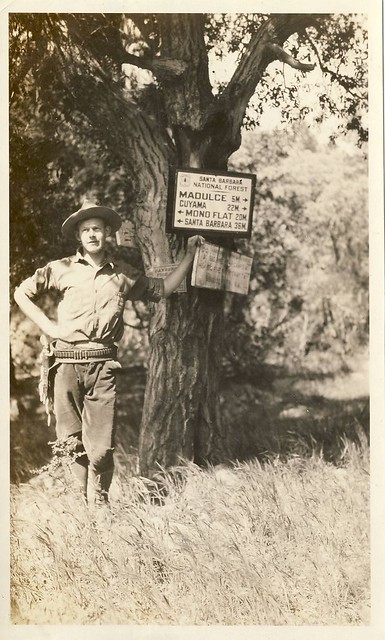 The hand-written note on the back reads only “Alamar Canyon,” rendering the exact “where” of this specific junction a bit hazy. The upper enamel sign is easy enough to read, and initially lead me to believe this was taken somewhere near the junction of the Alamar Trail and Hildreth jeepway, around the vicinity of modern-day Rollins Camp (which wouldn’t appear for almost a half-century after this photo was snapped).

It’s the two wooden signs that truly pique my interest, however. The one facing away is a mystery lost to the ages, but the one upon our intrepid ranger leans reads thusly:

Note there is no mention of either Alamar Guard Station (built in 1937) or West Big Pine Lookout (built in 1934). Originally I had thought the mileages listed were 3, 7, and 6, respectively, but there are few precedents of listing points “out of order,” as it were. A check of the 1926 SPNF and 1938 LPNF visitor’s maps fails to yield any real insight into what the configuration of those camps along the old Cuyama and Santa Barbara RD boundary might have been; such are the trappings of the smaller-scale maps. 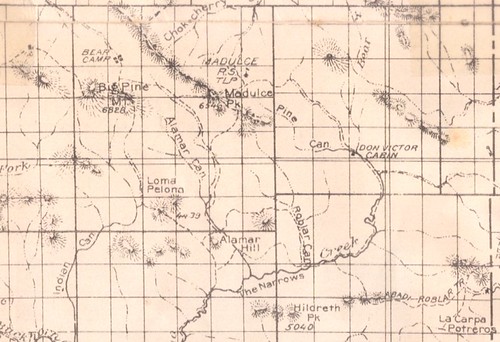 Any insights as to what those illegible sections there along the stain might say are welcomed. 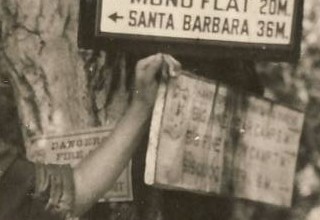