Late last year my buddy Derek over at 100 Peaks guest-blogged a piece for Sport Chalet about getting kids interested in the outdoors. Obviously that’s not really an issue for Clan Carey, but it did make me ponder my own approach and decide it was time to up Little Man’s mileage.

The Sunday we’d chosen to rendez-vous with another crew of LPNFanatics and (finally) scout one of the Four Horsemen was a forecast of ice and misery. Perfect conditions of course, but Caltrans decided otherwise and shut down our access routes. Naturally I should have expected this; a disproportionate number of trips these past few months have gone to Plan B (and often C).

Plan B this day was a half-day mosey up Horn Canyon to The Pines — a classic lazy Sunday. And so a rag-tag crew consisting of Bardlero Primero (Patron Saint of the 20W15), Cubmaster, Little Man, the uber-hund, and myself made for the Thacher parking area that crisp morning.

The Little Man had been to Horn Canyon a handful of times already, but never beyond the fourth crossing. That was about to change.

We put Little Man (later given the trail name Trailmaster Jack by Bardlero) on point, and enjoyed a steady pace up that cold canyon. Frost and unseasonably dry crossings were the order of the day, and only upon hitting some patches of sun on the exposed upper stretches did we peel off any layers. It was a genuinely chilly ascent. 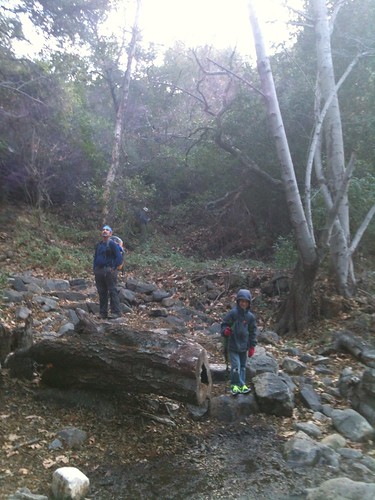 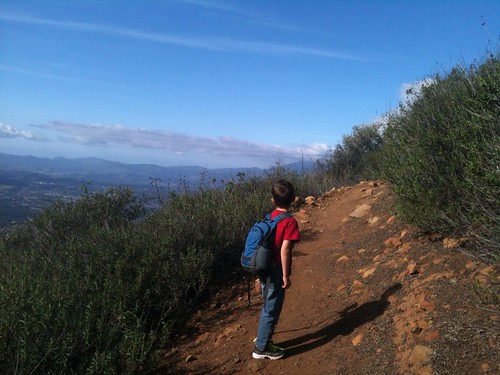 It was a busy day on the trail; dayhikers and backpackers and birders and we exchanged greetings at various points. With the uber-hund ever at his heels, the Little Man pressed on, stopping only for water breaks or to greet dogs along the trail (he’s a dog magnet, what can I say). 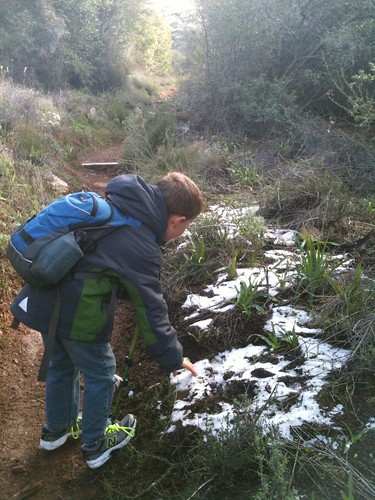 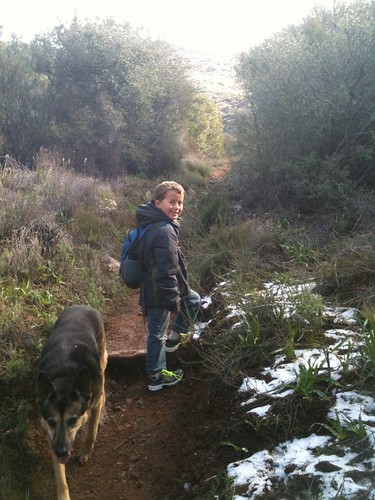 When we finally reached The Pines, that lovely copse of Coulter pines that was the brainchild of Jacinto Reyes and in recent years has become the ward of Thacher students, the sky quickly darkened and temps took a precipitous drop. I already had the kettle on for tea and we were enjoying a repast of sardines and cheese (and yes, some single malt) on the great benches fashioned in recent seasons by USFS fire crews, but Little Man felt a fire was in order. 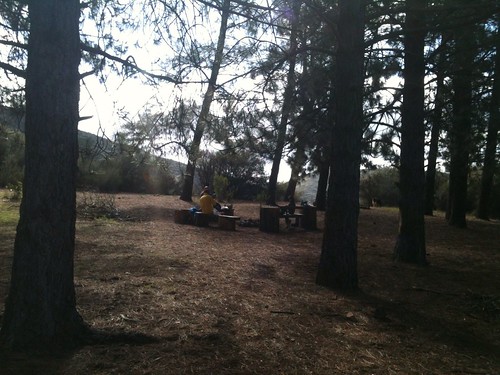 Now, I have no shame in stating my Girl Scouts (aka the Lady Mountaineers of Troop 201) are primo fire-builders, so much so they trained other Girl Scout units at a recent skills day. They rule. But apparently one of the benefits of not only being a Cub Scout under my direction but also of getting dragged along on a few Girl Scout excursions here and there is that Little Man has more skills and better lungs than I gave him credit. 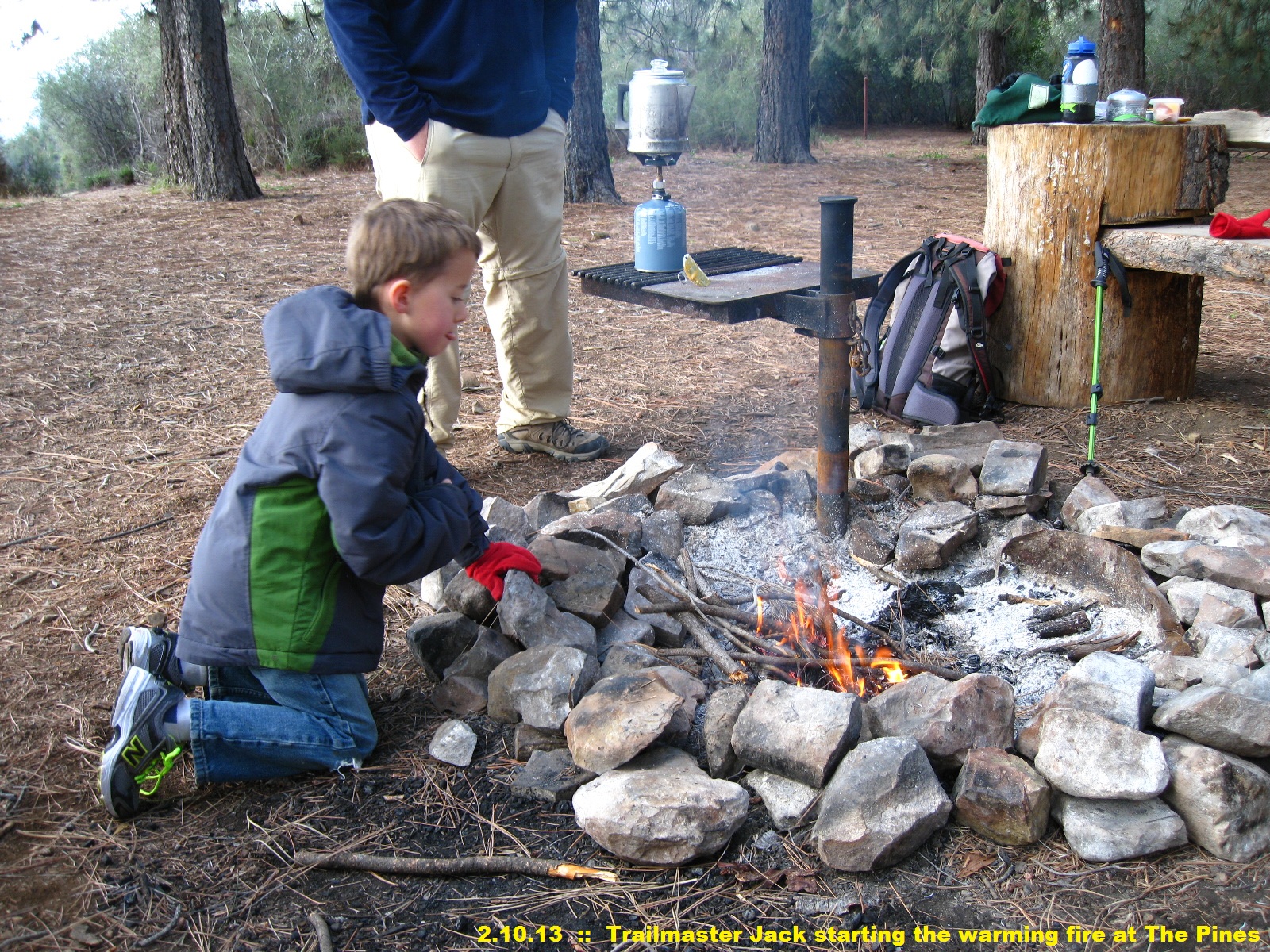 Tinder, kindling, and fuel wood were collected in mere minutes and soon we four were all appreciating the mini mountain man’s warming fire. A proud moment for me; I won’t pretend otherwise. 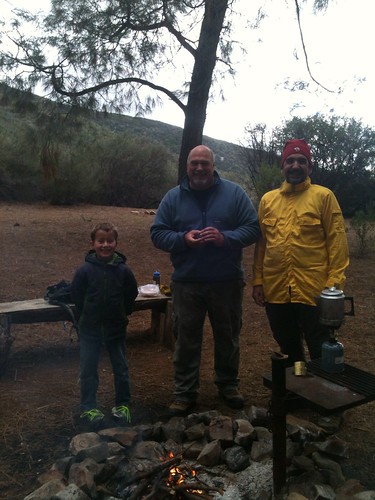 It was a lazy hour (or two) spent in that perfect little corner of the Los Padres. In the “down in the weeds” angle I’m sure you’ve come to expect from entries on this site, I am happy to report Bardlero found the chimney to an old ice can stove, and that we headed further up-trail to pick around at the junction of the old 22W40 route (more on that later).

How to Embarrass a 7-year Old in Three Easy Steps. Image courtesy and © Bardlero Primero. 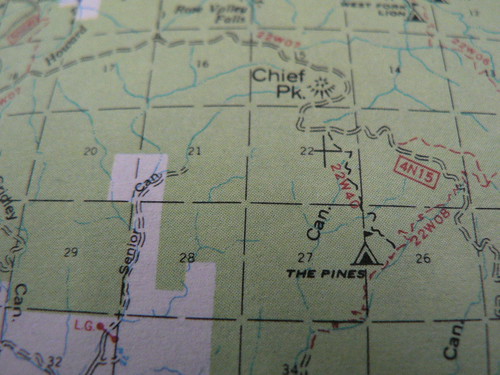 In D’s guest blog, one of the points he makes is that a parent should “create a positive outdoor experience” for the wee hikers. Cubmaster and Bardlero were my partners in crime on this one, and I think this was a defining trip for Little Man-cum-Trailmaster Jack … so my thanks to them for helping my boy along that path, both figuratively and literally.

3 Responses to Lazy Sunday: The Pines