How One McDoofus Move Can Change Your Entire St. Patrick’s Day: A Cautionary Tale

Over the years, the RSO and I have made a habit of taking a half-day hike somewhere on the LPNF on St. Patrick’s Day. (See “Now is the Spring of Our Discontent” for St. Paddy’s 2011.) The trick to these sojourns however is to be home in time for Mrs Carey’s fantastic dinner.

For the 2013 edition, the Expat was in town and both Derek over at 100 Peaks and Lego-lass were available. And after having read Stillman’s and Elliott’s most excellent accounts of ascending White Ledge this past January, Derek and I had pondered how practical an approach of White Ledge might be from the north. Peakbagging has never been my thing, but it was worth investigating, at the very least. And if everything fell into place, even getting as far as the old 24W08 tread — the vaunted Ocean View Trail — would be more than a victory here. 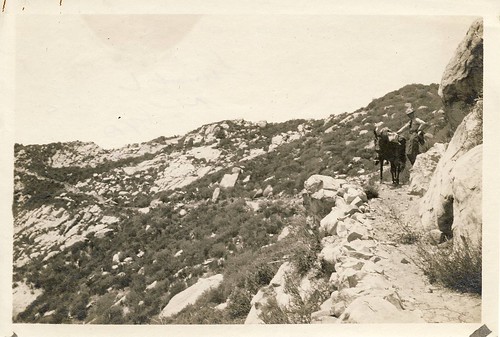 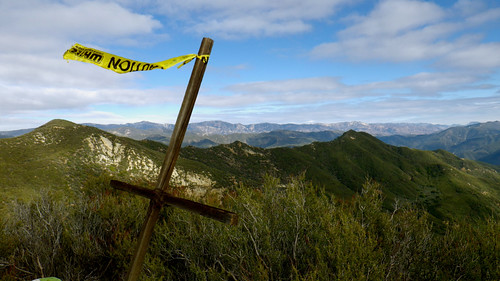 It seemed impractical from the get-go, and I don’t mean from the trailhead. Just looking at the drainage we were targeting, the ridiculous contours, the tendency for north-facing slopes to be a thicket of vegetation that knocks one’s pace down into the glacial speed category … well, a few nights previous whilst Lego-lass, EP from Ventura County Canyoneering and I sat over a few pints, we pretty much agreed it wasn’t going to happen. But what the hell.

We rendez-voused a few hours before sun-up at Matilija, I made the quick intros and then we waited a while for the RSO. No mobile coverage at the “parking loch,” so if he’d overslept, been otherwise delayed, or other … well, no way to know. We headed off along the service road sans the RSO, but leaving a trailhead without either him or one of the pack felt like leaving the house without my car keys. Under the beams of our headlamps, the misty road and environs had a dampening effect on what noise we might otherwise make on this well-trod route.

Of course we made quick work of the mile-and-a-half to Murietta Camp, noting at the major crossing downstream that the reflective tape on the Carsonite signs are pretty darned handy in the wee dark hours. Some campers were sacked out under the stars, so very quickly and quietly I pointed out the base of the old latrine from the camp’s days as a car-accessible destination to the crew and then Derek and I began sorting our best point to drop off the trail and begin following our chosen drainage. A short ways after the 24W07’s second crossing, we agreed we’d gained a bit more elevation than our optimal put-in, and so we four turned around, intent on a gap in the ceanothus Derek and Lego-lass had spotted moments before.

Suddenly, the sharp report of what sounded like a moose in heat echoed from down-canyon. I can’t imagine the start such an unworldly bark must have given those souls slumbering at camp. But I responded in kind. The RSO was on an intercept course, coming in fast! Soon enough we spotted a headlamp piercing the dark down in the ravine; he’d jumped off-trail early and was headed our way. Moments later another round of intros were made, and we five rock-hopped along the massive boulders and wove our way along the alders of the Murietta drainage. 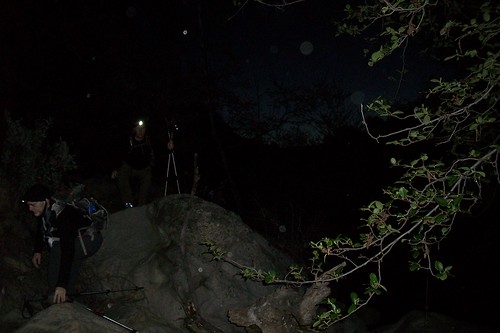 The occasional orange trail flagging gave me pause; it didn’t seem to me some HPS bagger or other intrepid individual would take the time or bother to flag the route we were planning. A prominent flag was apparent at precisely the confluence of the drainage we’d chosen to ascend. Our Fiskar’s cinched tight and gloves on, into the poison oak and ferns and cobbles we went.

It was beautiful. Far less bush-whacking than I think any of us expected, and the occasional spot of game trail facilitated our progress. We took a brief respite just as the sun lent its first light to the canyon. 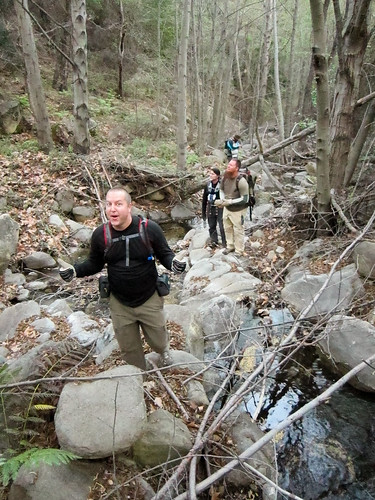 Bagging White Ledge still didn’t seem practical this day, but this drainage had it all … including the requisite pot grow detritus. Tarps, hose, a good two-burner stove, unused fuel canisters still in their shrink wrap, canned chiles, and saw mix bottles and pesticide bottles (the latter two chewed on by the local ursine population … thanks dope-growers and smokers, you can claim responsibility for that poisoned bear). 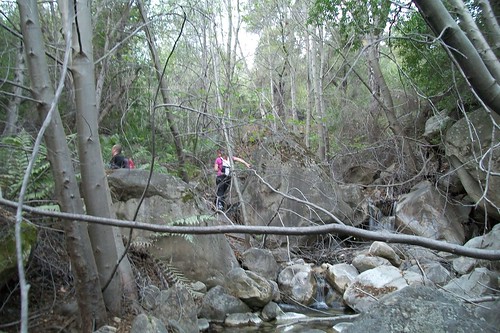 And so of course it’s in such a nice environ I inadvertently feel compelled to make some bone-head move. Out of the drainage and navigating a short field of bowling ball-sized cobbles, I took a moment to admire the blue and white sheet of flowering ceanothus on the creek’s east bank … and nearly face-planted as my ankle rolled beneath me and gave out.

I tried to walk it off, etc., but as we continued up-canyon it became increasingly difficult to put much weight (especially mine) on the ankle, and I could feel it swelling inside my boot. Dammit all.

So near the upper stretch of some pot-growers’ debris, I reluctantly called it. All were good sports, and the promise of those beers Lego-lass had stored in the ride was motivation enough to enjoy the return trek with good cheer. The Expat set up his gear and took a group photo that upon review looks to either be a rock and roll album cover or something for Vanity Fair, meaning in either regard it’s the usual professional-grade work we’ve come to expect from his wilderness shutters, and one of my favorites of the new year. Along with Nico’s recent black-and-white work, my photo-documentation falls further and further behind the pace of current LPNF photodocumentarians. 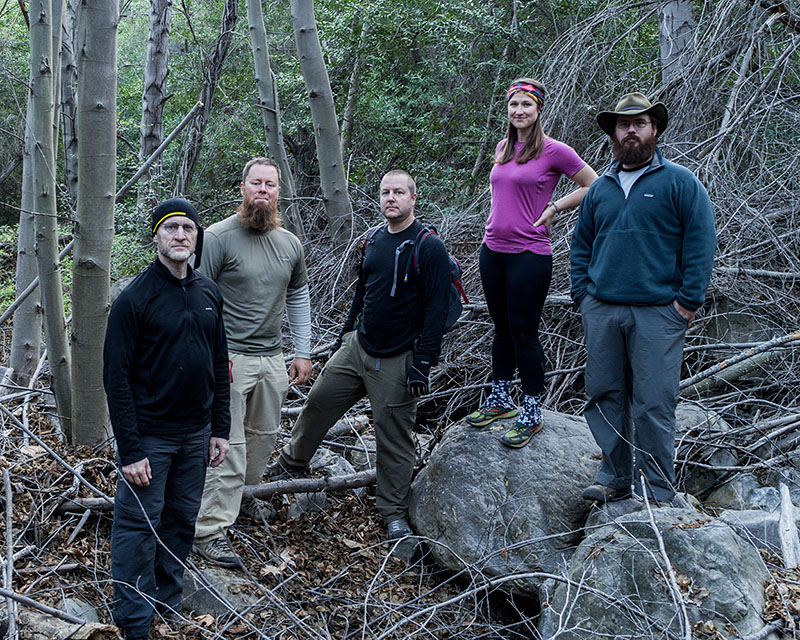 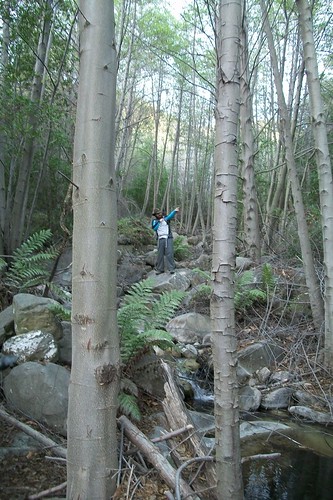 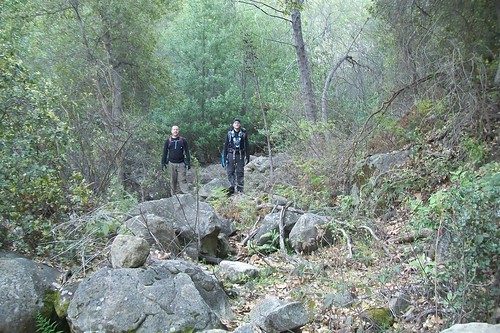 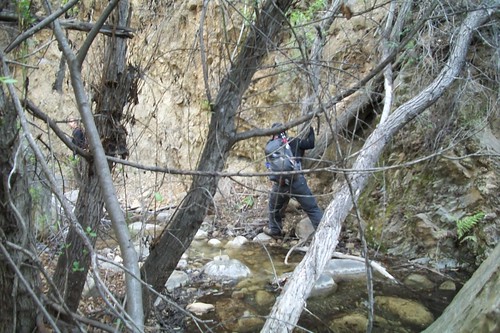 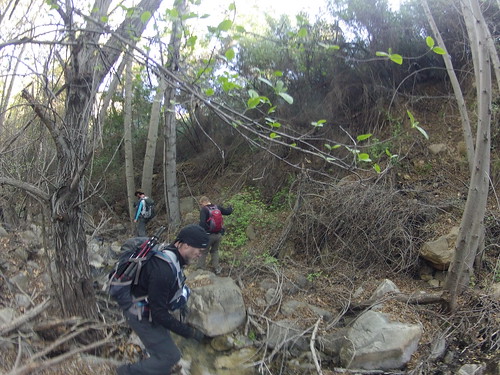 In time we returned to the confluence of our tributary and Murietta Creek, where the RSO and I took the time to exasperate our resident light hikers and pulled out tins of kipper herring, deviled ham, and other delectables. Here, we could see the orange flagging was being used to mark various pools along the watershed, presumably as part of a fish count or other scientific study. 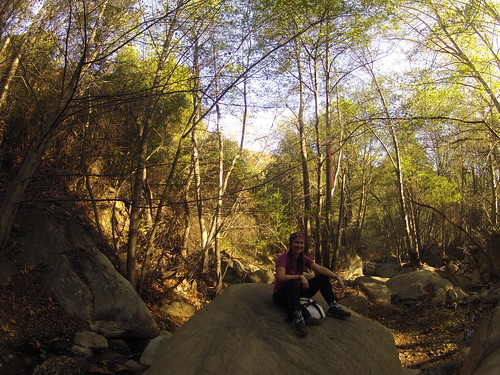 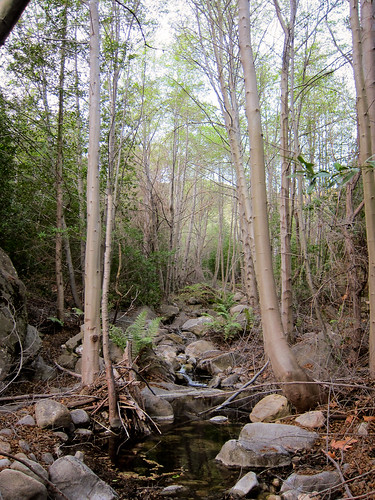 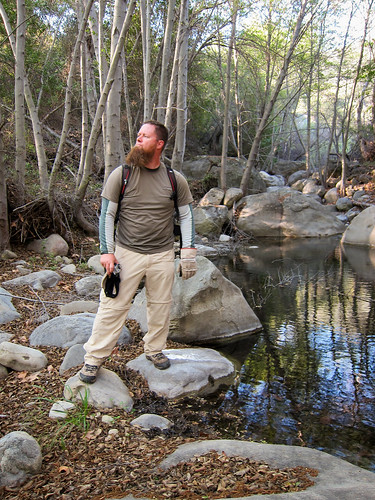 Once back on the 24W07, I fared alright with my cranky ankle, and we snuck through the camp again whilst the campers continued to doze. The service road was abuzz with numerous hikers now, and the parking lot even more so. Scouts, families, and a crew of trail runners decked out as leprechauns all went about their business whilst I put my ankle in the cooler and we toasted our ever-so-brief St. Paddy’s sojourn. 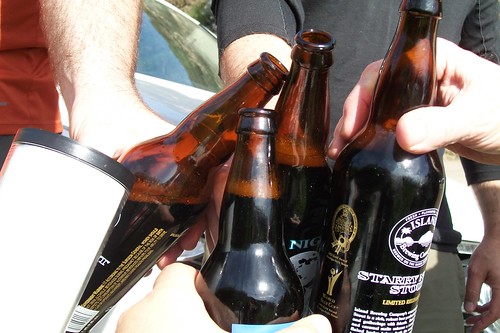 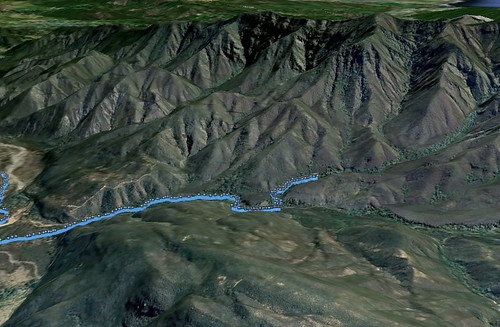 I went home with time to spare for my lovely bride’s home-cooked meal and the accompanying beers, bonfire, and good times, but whilst elevating and icing my ankle as prescribed, I unfolded my old White Ledge quads. 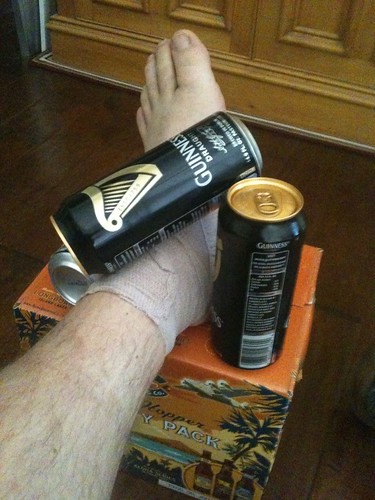 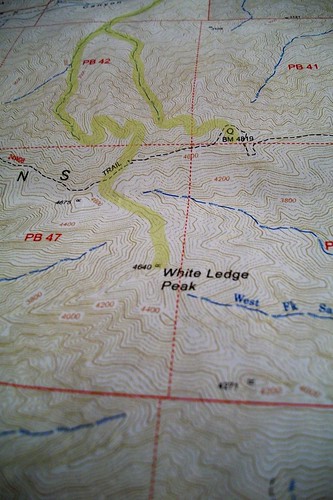