Diamonds in the Rough, Part 1

Call me a romantic (unlikely), but I really have a soft spot in my hiking heart for the “abandoned” trail camps of the southern Los Padres.

Old car campgrounds – like those at Beaver or Cherry Creek or the Wagon Road sites — have just become dumping grounds for clowns who exercise their Second Amendment rights the most but deserve them the least. Others, like the old Grade Valley campground, are now trailheads with fancy parking spots and restrooms.

The sites of car-accessible camps tend to absorb as much as punishment and litter as when they were maintained … the few exceptions being those now in designated wilderness areas (e.g., any along the old Sespe Road).

Some trail sites — such as Upper Matilija along the Upper North Fork route — were “officially” abandoned by the Forest Service decades ago. But due to their being right on the trail – and along a fairly well-traveled route – they still receive enough use that they are de facto sites used without need for USFS maintenance. There’s obviously a correlation between not only whether the campsite was abandoned, but also the state of repair (or abandon) of the trail on which it is situated. 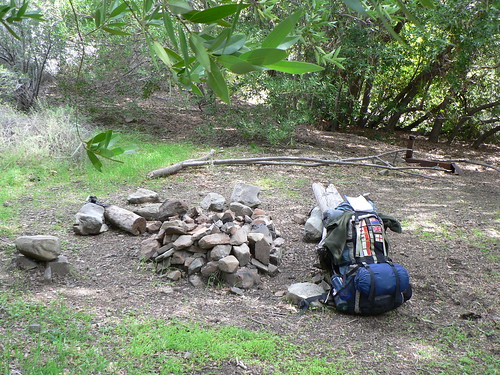 Black Crown over at  Ventura County Canyoneering started a discussion about remote sites in the Los Padres this past summer, and though I admit some of the Forest’s abandoned sites aren’t all that remote, they are far removed from the collective consciousness, and certainly fairly removed from USFS radar (and budgets).

These sites are akin to the Timber Canyon site I discussed in my last post — sites that were abandoned by the Forest Service during the fiscal crunch of the 1970s, and which have subsequently been nearly forgotten by the wilderness-roaming population.

The wildfires of the past decade have made finding some of these sites easier than in years past. In the Ojai Ranger District, where our story begins, the 2006 Day Fire chewed up a ridiculous amount of the Sespe Wilderness (to the tune of 160,000+ acres) and destroyed some irreplaceable pieces of Los Padres history (e.g., the Topatopa Peak Lookout), but in the process revealed some of the smaller, less-noted gems. 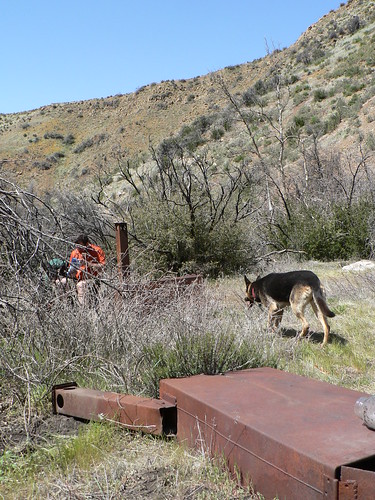 Horsethief Camp, named for the desperados who stole stock from further south and grazed the animals on Old Man Mutah’s pastures before continuing on to the Central Valley, sits largely unnoticed along the Red Reef Trail. Situated comfortably on a flat just beneath a gap dividing Red Reef and Timber Creeks, it’s been denuded of most of its shade, but still features three ice can stoves, and space enough for a small crew. (Given the era in which these trail camps were given up to the elements, it’s little surprise many of them feature that campsite relic some of us backcountry nerds find so enchanting. More on these stoves another time.)

One of my more recent trail camp find “victories” was Topatopa Lodge, nestled in the upper headwaters of the Last Chance fork of Santa Paula Creek, on the flanks of No-name Peak. 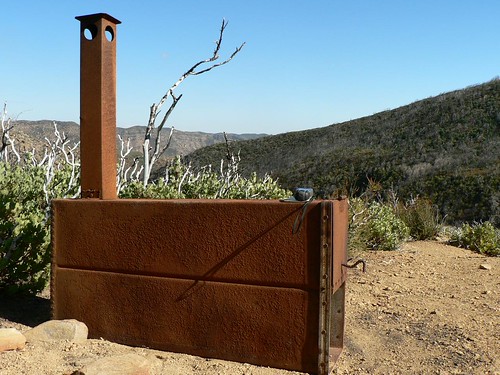 Though the site only appeared intermittently on Los Padres visitor maps — e.g., it wasn’t on the 1967 or 1968 editions, but did appear on the 1969 edition, only to disappear again for later editions — it was a staple for Santa Paula and Ojai-area trekkers for decades. The site was included in the USFS trail signage as early as the 1940s: Coast and Geodetic Survey records mention signage in their documenting of Hines Peak’s monument indicating distances to “TOPA TOPA LODGE” [sic] from both the junction (“2-1/2 MILES”) and the junction with the Last Chance trail just north of camp (“1/4 MILE”). It does not appear on any modern maps. And while not a magnificent site by any stretch, it’s a fascinating and forgotten little corner or the Los Padres. 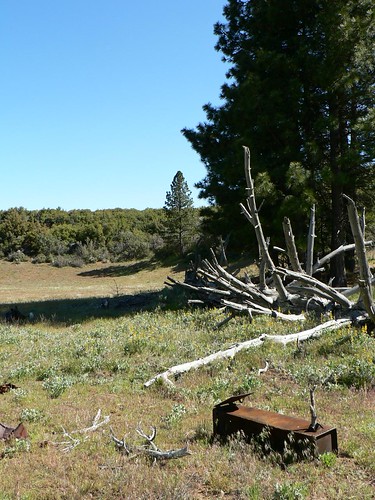 Dry Lakes West seems to be most commonly visited by geocachers scouting the area, and might very well be the nicest of these less-frequented sites.

Sweetwater? Alder-Sespe? Halfway Spring? Cobblestone? The list is fairly lengthy; the Ojai RD bore a disproportionate share of the 70s closures. But they’re out there.

3 Responses to Diamonds in the Rough, Part 1