In the waning days of 2014, the rather impressive rains that inundated California’s Central Coast after a long spell of virtually no precipitation were a welcome respite for our parched backcountry. But with those rains of course came some problems (most notably the mudslides in the Springs Fire area in Camarillo Springs and along the PCH).

Another result was a pretty impressive rockslide along the Gridley Canyon Trail, a few miles up the single track and only a short distance from the old trail camp. 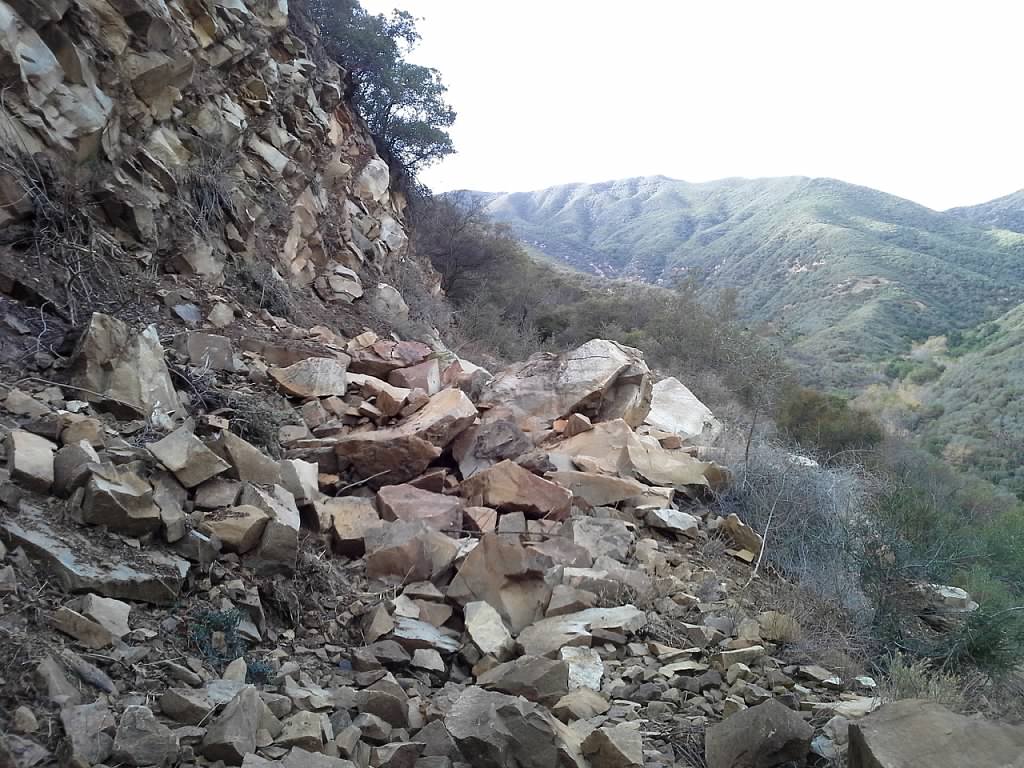 And so a call went out for “6 to 8” volunteers who might be able to help clear this route. As the Lady Mountaineers of Troop 201 were due an outing this month, a trio of those mighty backcountry women were quick to sign on, as were the usual suspects … the RSO, DAW-G, Skunkbait, Perry in the Morning, and Trailmaster Cobra (aka Little Man).

Allow me now a brief tangent with regard to Trailmaster Cobra’s passion for service projects. Shortly after his sixth birthday, the young master joined me and the RSO and a small crew for a half-day of brushing on the OVLC’s Fuelbreak Road Trail. He basically served as a swamper (pulling brush) the entire time, but from that point on he was hooked. 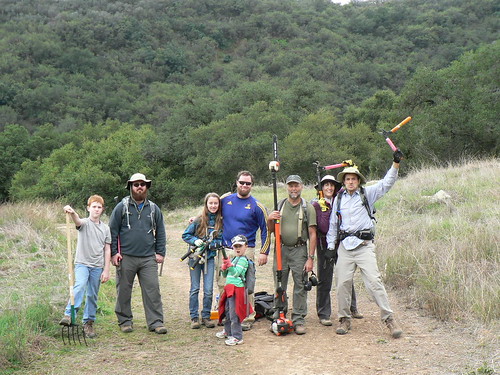 In subsequent years of course he (and his fellow Cubs) and his big sister (and her fellow Scouts) have joined me for numerous projects across the southern Los Padres, with Trailmaster Cobra logging over 100 volunteer hours on the Los Padres NF himself. 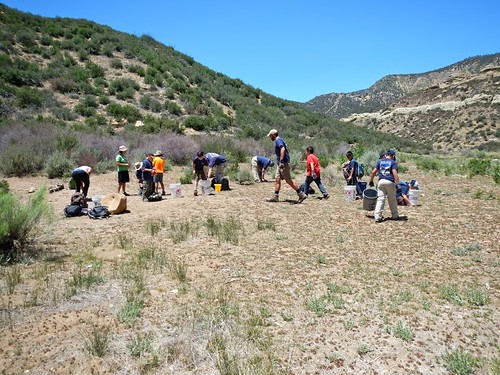 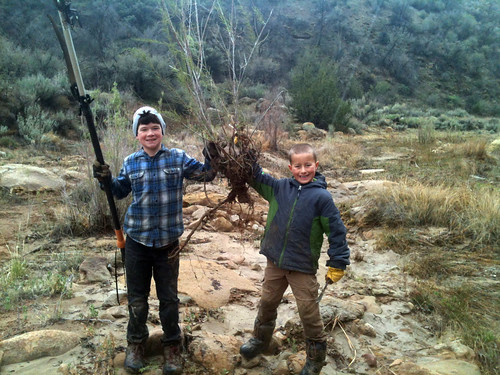 But let’s face it, he’s 9. So when the email from Ranger Heidi stipulated we would all need to wear hard hats when working in the fall zone and I mused aloud whether he should just have his own hat instead of borrowing one, he was stoked! The prospect of having his own hard hat for service work was pretty much all he talked about the rest of the afternoon until we finally arrived at the local hardware store. He was so proud to walk out of there with his own hat.

Sorry, back to Gridley. In addition to our regular crew, M. Aurelius — fresh off the plane from London town and a former Jolly Rover trail worker in the NY State Parks — joined us, and on a cold Sunday morning we assembled at the Ojai ranger station for the usual safety briefs. 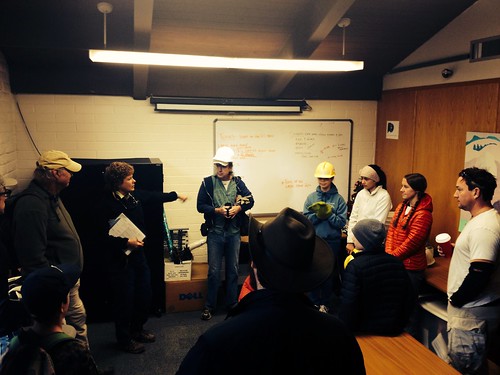 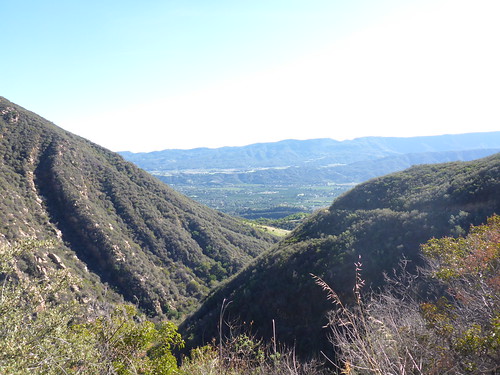 And then it was up the hill some two and a half miles to the site of slide. Some of the rockfall had been cleared earlier in the week by local volunteer legend Mickey McTigue, but there was still much to do. The team broke into two crews for the first half of the project — one to clear the debris from the main slide, and another would head up to Gridley Spring camp and clear brush back down. The RSO and I led the Troop 201 Lady Mountaineers up to Gridley and cleared and clipped until noon. 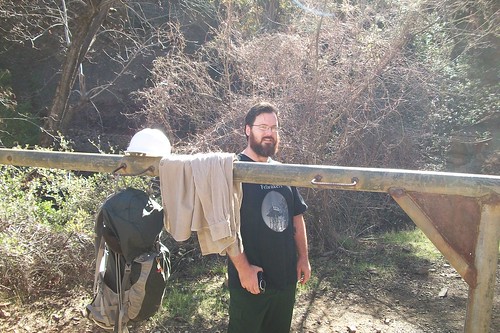 The RSO at Gridley Spring | December 2014 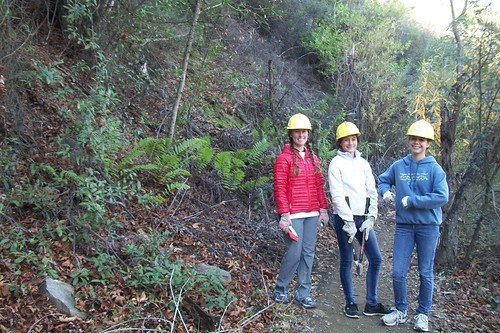 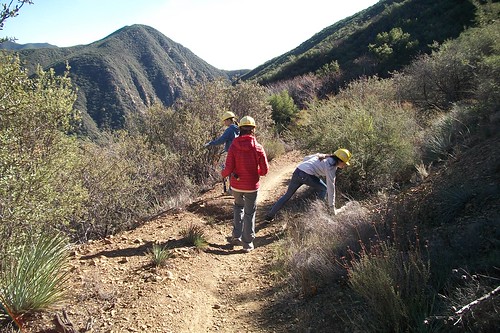 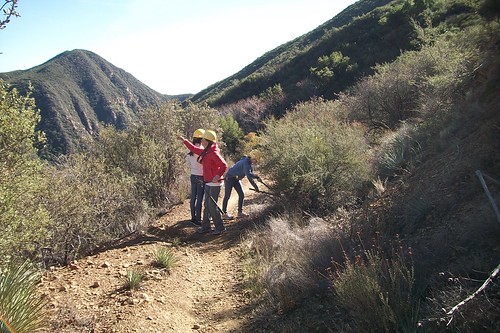 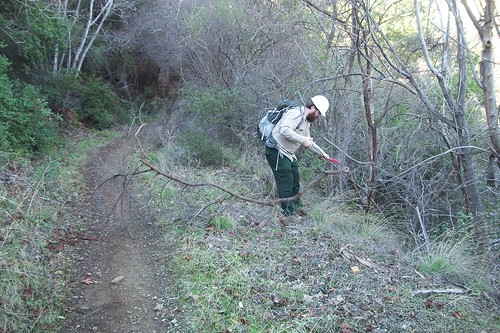 Meanwhile, back at Slide Site No. 1, the rock team was busy clearing the trail of debris, with the mason-trained M Aurelius guiding the way.

Image courtesy Perry in the Morning. 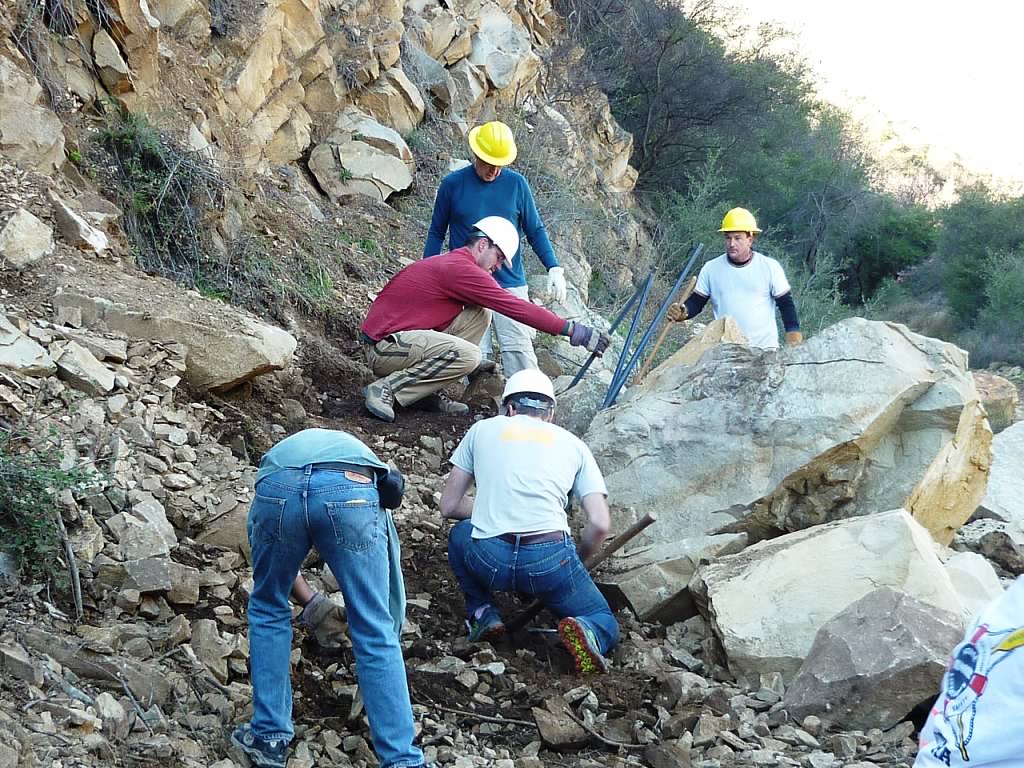 When we broke for lunch, our two Webelos volunteers busied themselves preparing cocoa and cider for everybody, and we enjoyed the marginally-increasing temperatures (all the way into the low 50s by now!). 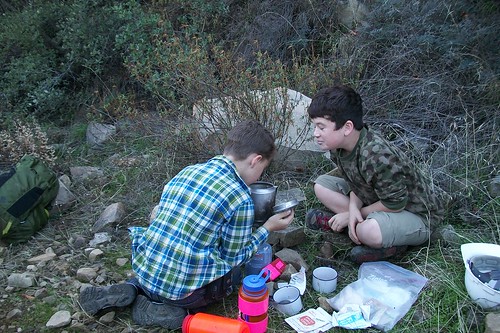 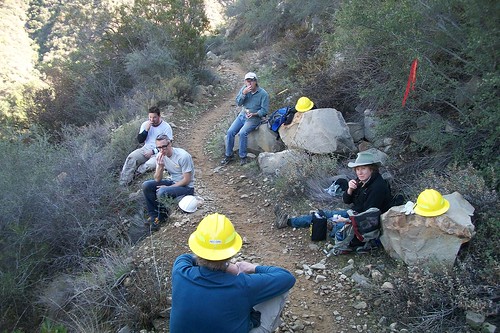 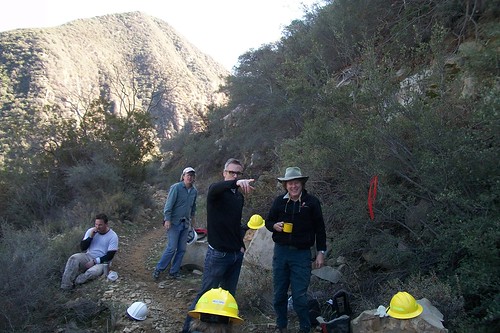 Lunch over, DAW-G gave the kids clinics on rolling dips, whilst some of us headed back down a ways to lever 6 or 7 very large boulders from another section of trail. 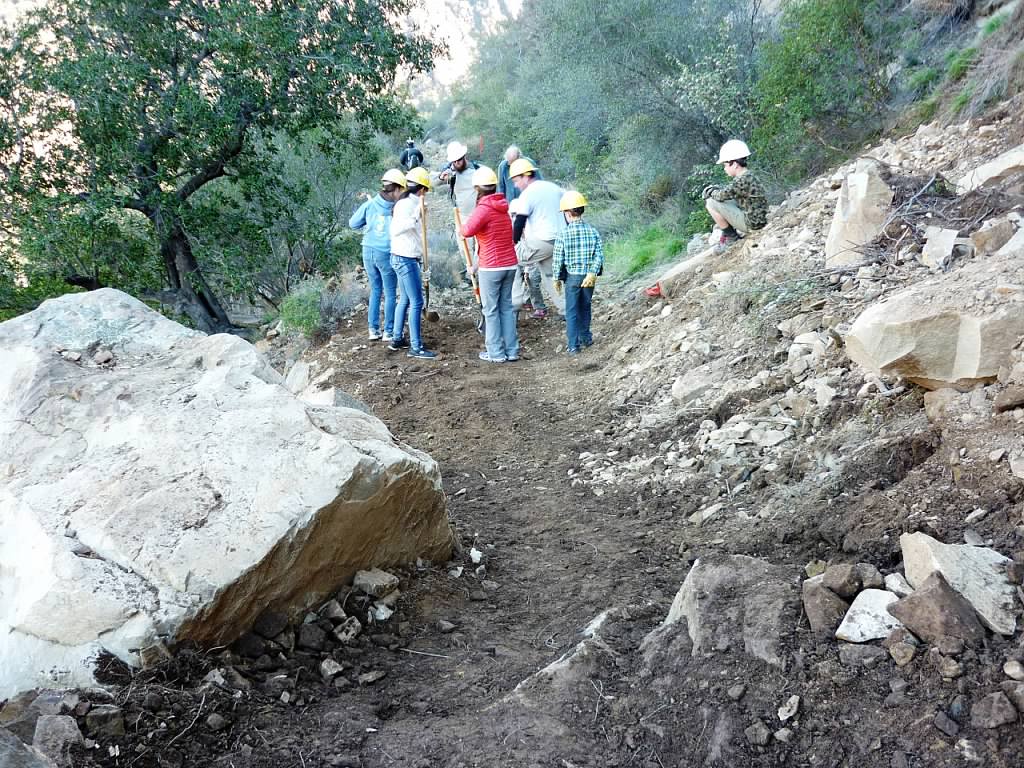 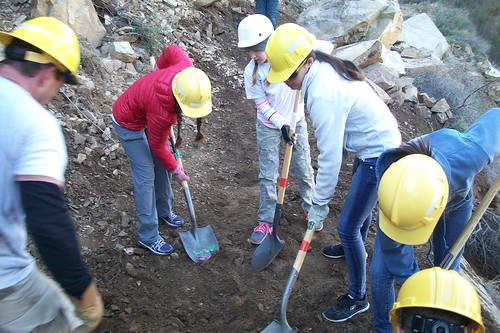 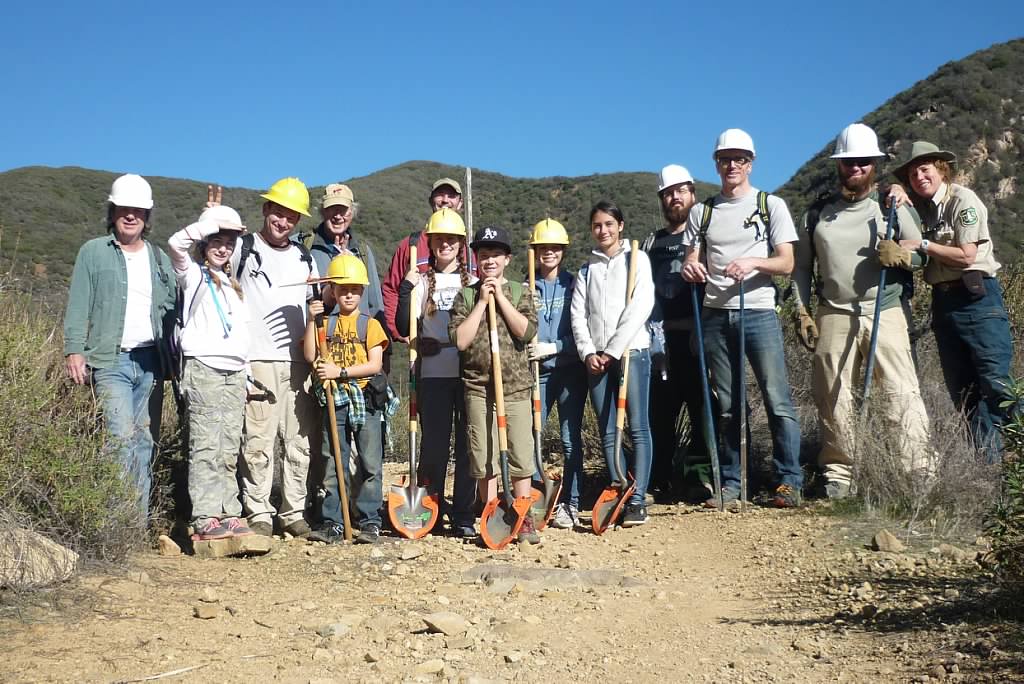 Another great project! And now when I take a look in Little Man’s room, with its typical clutter of LEGO bricks, books, and his hiking gear leaning against one wall, his new prized possession is displayed prominently among them: 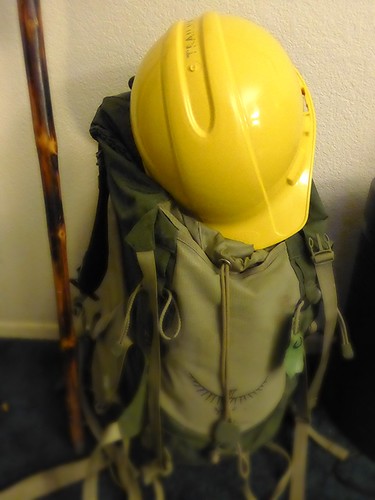 (Gridley Canyon is detailed in Route 57 of Hiking and Backpacking Santa Barbara & Ventura.)