For Dog and Country

Throughout history, when things looks most grim, salvation is always sought by means of men bearded. Union torn asunder? Lincoln. Desperately want that Schwinn Stingray for Christmas? Santa Claus. Intergalactic meanies got you down? “Help me, Obi-wan Kenobi, you’re my only hope.”

So when the red phone rang in the dungeons of maptitude one fine summer morning it was no different. The United States Department of Agriculture needed a full trail survey and camp inventory of the 19W10, aka the Agua Blanca route. Down-in-the-weeds detail was the order of the day, and they needed said survey tout de suite.

Oh my goodness, had they ever called the right number.

The beards assembled in something reminiscent of dwarves laying siege to a kitchen table at Bag End. Because of projected heat, the uber-hund was left to guard home base … but we knew we had to do our four-legged bodyguards proud. Hound-less, we ventured to the eastern Sespe Wilderness to execute our civic duty. 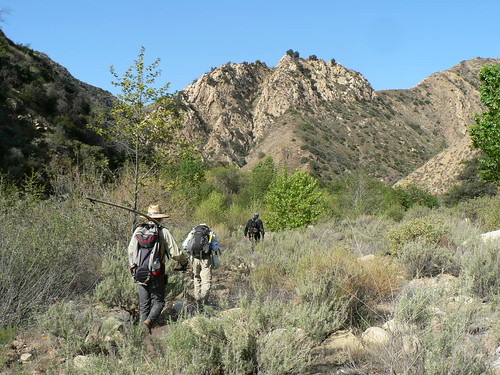 This would be for dog and country.

One Response to For Dog and Country