Two More Bricks in the Wall:
Coche to Upper Oso 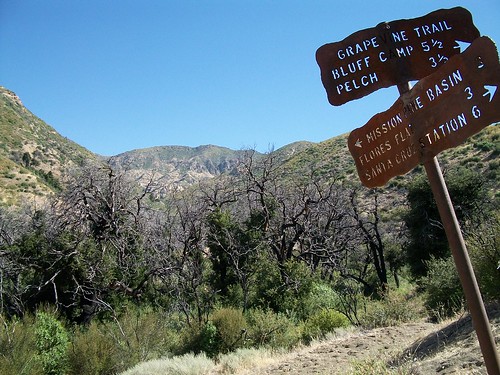 From Coche, the going was much easier. We ambled down to the Grapevine Junction, traded relevant Marvin Gaye and CCR trivia, and headed out along Santa Cruz Creek.

The Santa Cruz Trail was in surprisingly good nick, with some exceptions. We had to clamber over two blowdowns (including one especially thick oak), and spent some time clipping at the 6 crossings en route to Flores Flat. 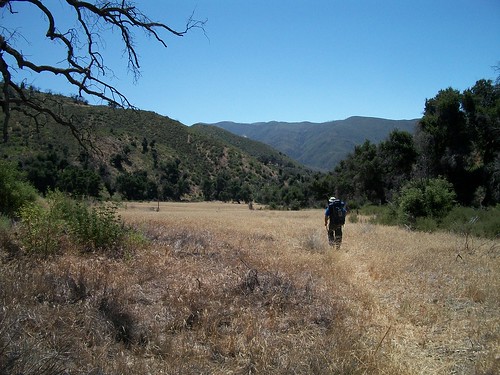 After taking a mid-day siesta and stocking up on water at Flores, we pressed on. The mercury was rising.

The mile from Flores Flat up to Roma Potrero, was — for lack of a better word — ridiculous. We were up to our beards in thistle, and the mustard was well above our heads. At one point while trying to bash through it, I found myself leaning into the hedge of black mustard, and was held up by the mass of dried vegetation alone — mind you, that’s 100kg of hiker and over 20kg of gear to which this dessicated barrier would not yield. Here I will admit to mental images of Frodo in Shelob’s lair. Only I was armed with but a single trekking pole and nothing a tad more practical (read: Sting). 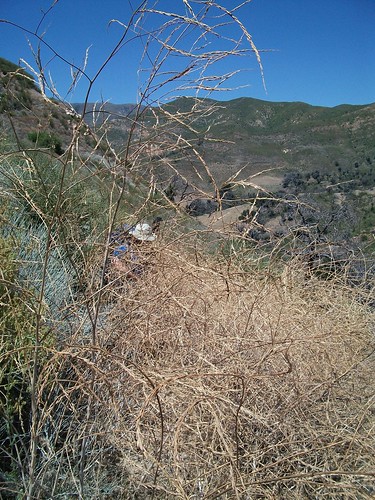 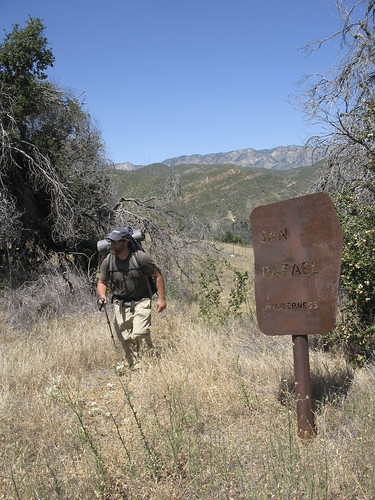 We persevered to execute a deft circumnavigation of an indifferent but still intimidating C. oreganus shortly thereafter. This specimen sported enough green and yellow we found ourselves pondering the range of C. scutulatus pretty much until we had Black Canyon and then the Santa Cruz Station in sight.

Ah, Santa Cruz Station. The time one could spend doing a whole lot of nothing around here boggles the mind. We spent the rest of the day reading through the trail registers with our feet propped up and a dram of Bruichladdich at our elbow, counted quail chicks trying to nestle beneath our packs, picked around the old concrete-and-steel camp stoves, peered through every window of the station, marveled at the healthy A. macrophyllum and A. rhombifolia specimens creekside, and generally lazed about. 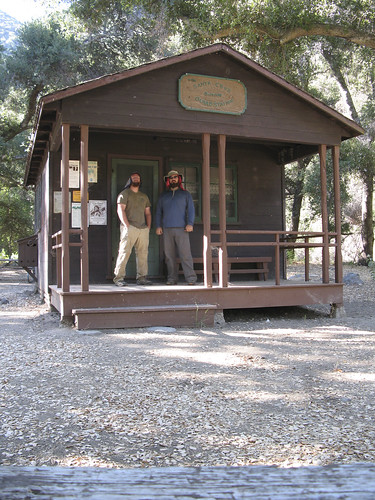 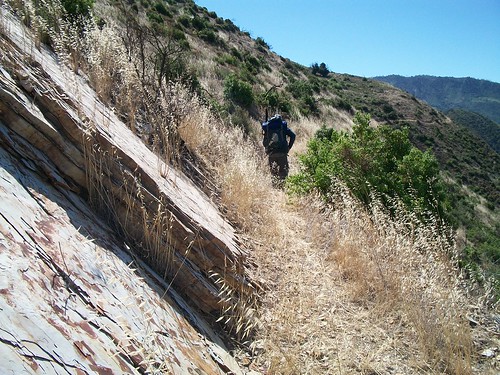 The next morning, we were up early to beat the forecast heat, and headed up the switchbacks above Santa Cruz Creek. We removed one live oak stretched out across the trail, and made good time to the start of 40 Mile Wall. Only weeks earlier there’d been a pretty horrendous equestrian accident along the Santa Cruz Trail, and along this stretch we could certainly understand how easy it would be for a horse to lose its footing. Our third C. oreganus of the trek narrowly avoided ZK’s ankles, and whilst amped on that adrenaline dump we observed the track up 40 Mile Wall to basically be a mess of debris, shale alluvium, and buried crib-walls.

At the head of the Wall, it was a thicket of poison oak, blackberry brambles, and over-aggressive bay. We wielded the Fiskars in good faith, but the heat began to take its toll and shortly before noon we passed through the junctions of Little Pine and Happy Hollow and through the Coulters and serpentine formations en route to Alexander Saddle. 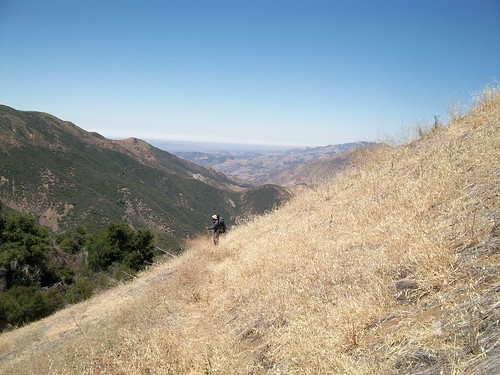 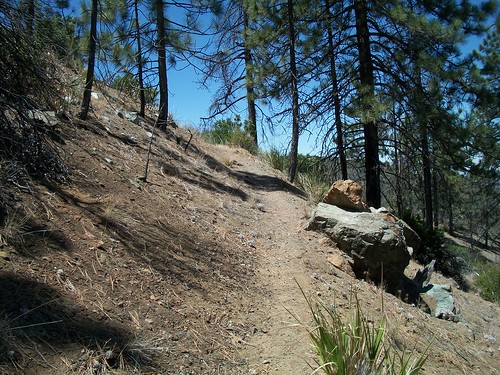 Atop Alexander Saddle there was no reprieve. Despite the great views we spent no time soaking them in; the air was still and we were cooked. We dropped from the saddle to the stock trough, cooled off a bit, and then endeavored further down this ridiculously hot path. This summer hiking is lame: we were built for the fog and drizzle, not triple digits and rocks so hot you can’t bear to stand near them. (Northern Scotland, you just got put on the short list.) 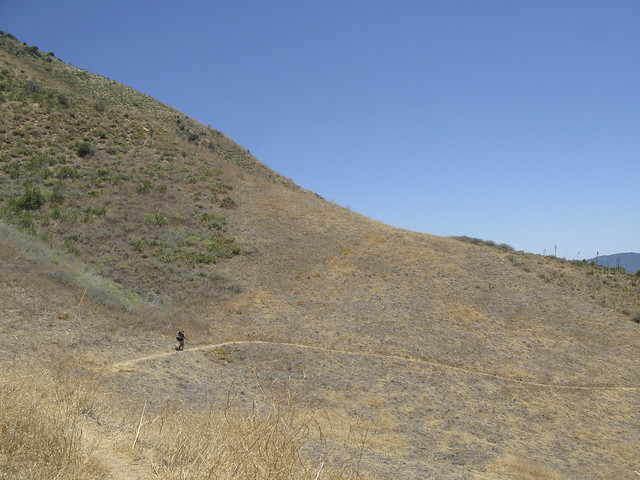 About a mile uptrail from 19 Oaks, ZK and I took a knee when we spied a gray fox dart across our path. I’d like to say our formative years in the jungles of Southeast Asia enabled us to creep up on the diminutive canid, but to be fair the little fellow was clearly just as spent from the heat as we and seemed to decide that whatever danger humans might typically pose didn’t apply this day. We could hear him panting from beneath the brush several yards away. 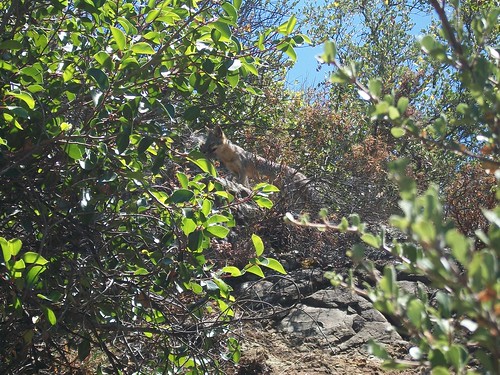 Finally we dropped into the Oso crossing above 19 Oaks, and simply waded in. It was one of those instances where it would be fascinating to see how a thermograph would depict the heat being drawn off our bodies and stretching into the cold pools downstream. I haven’t budgeted for that yet; apologies. Buoyed by our new and far more comfortable core temperatures, we double-timed it down the Upper Oso. In the blur that was that clear trail and then the Buckhorn-Camuesa Road, I tried to relate to ZK some of the geologic features about which I’d read in the USDA’s field guide of the area, but admittedly failed pretty thoroughly.

We reached Upper Oso, claimed one of the day-use tables, and cooked up some supper before our ride arrived.

My lovely bride, how do I love thee? Let me count the ways. 1: Unbidden, you bring us Double Western Bacon Cheeseburgers and Orange Fanta after a 5-day slog. Be still my heart. 2: … actually, that’s more than enough! <3

And so — finally — The Riddler is done. Now we’ve gone to the shelf and dusted off some of our long-standing “someday” dossiers … this is the part where we don the lab coats, turn up the burners, and concoct some unpronounceable compounds.

We’re about to get mad scientist ’round here. Are you ready?