The Tale of the Two Iron Horses, Part 1 of 2

For many Americans — myself included — July 4, 1939 is known as the date Lou Gehrig gave his famous farewell address at Yankee Stadium (“… today I consider myself the luckiest man on the face of the earth”).

The “Iron Horse” has always been my favorite player, a great example of sportsmanship and class in a sport (and sport culture) that these days largely consists of cheats and prima donnas. His story has been recounted countless times, and I certainly couldn’t do it justice … so I won’t even try.

But that same day, some 3,000 miles away and amidst the Incense-cedars and ferns at the headwaters of the Sisquoc, another iron horse was the attention of a small group of hunters.

I tend to fixate primarily on the Forest’s icecan stoves, but between the Ellis Apiary/Middle Matilija design, the Grapevine burners, and a handful of others, there’s plenty more out there that could stand to be documented. But the old stove at Upper Bear is well-known to trekkers of the San Rafael Wilderness, and one of particular interest to many.

Blakley sites an 1895 article in the Santa Barbara Herald detailing how in 1885 “cut a trail from Big Pine Mountain down to the head of the Sisquoc River.” James Ord, who held a patent to homestead at Loma Pelona, cut the shakes for his adobe from the cedar trees in this stretch of the forest, and the camp was named after Ord killed a bear there while hunkered down during a storm.

Both Blakley and Burtness relate how the upper site was built by the Hartman brothers as a hunting retreat. The camp was used by the CCC in 1939 during (presumably the final stretch of) work along the Big Pine Road, until the well was established at Alamar Saddle. 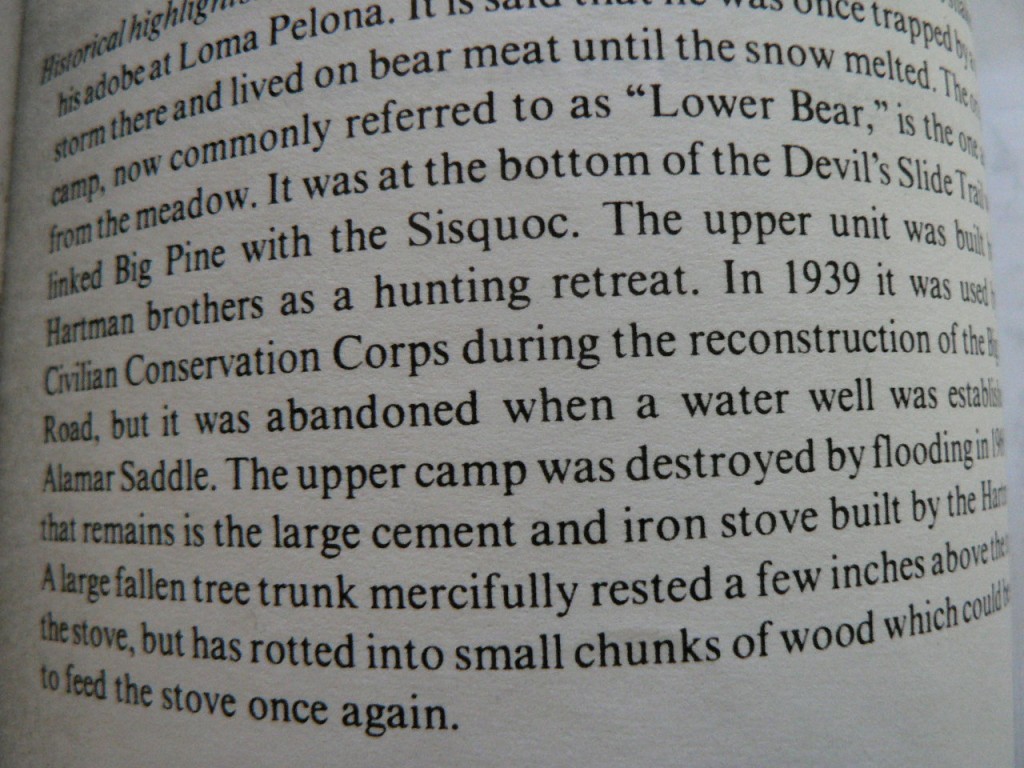 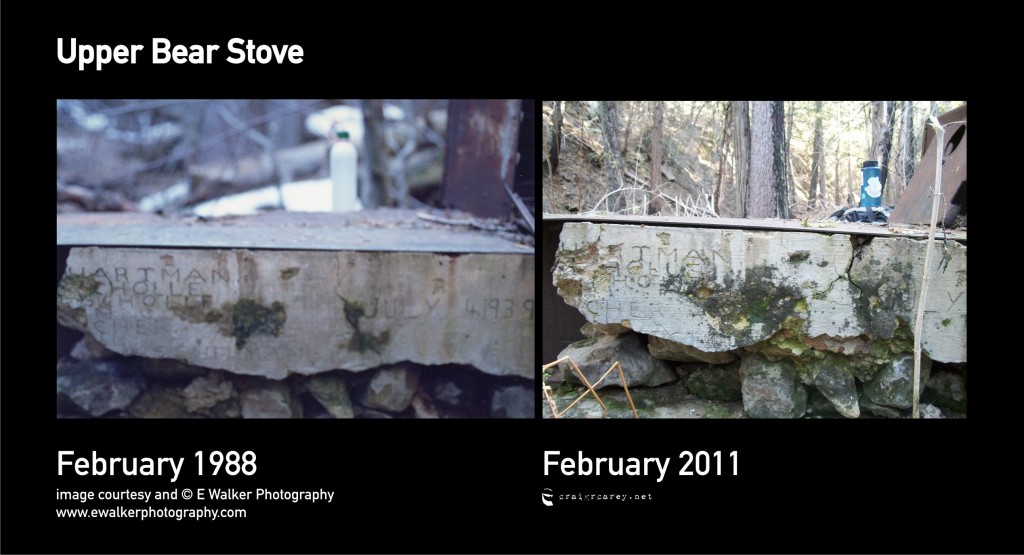 In recent years I’ve had a few chats with Bud Hartman about his father’s and uncles’ adventure in that stretch of the Forest. Among the wide-ranging topics, we chatted briefly about the Hartman legacy, how the Hartmans began using the site shortly after World War I, and about the Hartman-Scholle connection (the first three names engraved on the stove are Hartman | Scholle | Scholle).

But lost are the names of the other two present that day, and specifics as to the stove’s construction. Brown’s history lends very little insight, possibly because at the time of his writing the stove was less a historical curiosity and merely a six-year-old accoutrement on the Forest floor. I rather suspect the stove pre-dates the 1939 inscription, and that perhaps on their last visit before the CCC occupied the space, Hartman et al. were simply effecting repairs, and that it was upon a new base of concrete they made their marks.

3 Responses to The Tale of the Two Iron Horses, Part 1 of 2