The Agua Blanca Survey, Part I

We all know how this is going to end.

I’m a slow learner, let’s start with that. More times than I care to admit in life when I’ve pushed against the odds or opted for the path less traveled against advice (or even common sense) only to meet a wall, get injured, or simply fail miserably, some well-meaning soul would console me with the old maxim “lesson learned.”

In my case, it’s often more a case of “lesson received.” I concede I’ve received many lessons in my wandering of the southern Los Padres backwood … but I wouldn’t be so bold as to state I learned the lessons as perhaps I should. 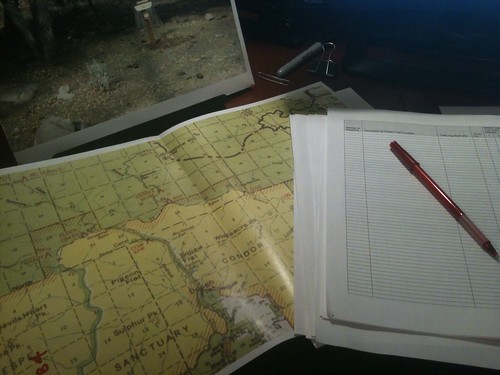 Rule 1, big bearded guys who don’t process heat well should not plan hikes in the Eastern Sespe Wilderness when the projected temperatures are in the high 90s and low 100s. That’s just stupid. We belong along the Pine Mountain massif, or the heavily-shaded slopes of Sawmill Mountain, or maybe in an ice bucket. So naturally, being a total knucklehead, I went ahead with planning the Agua Blanca Survey despite the forecast heat. We had assembled a veritable All-Star survey team (Eric from Ventura County Canyoneering, Nico, Cowboy, the Los Padres Expat, the RSO, and myself), and I was keen to leverage their collective expertise on this survey. 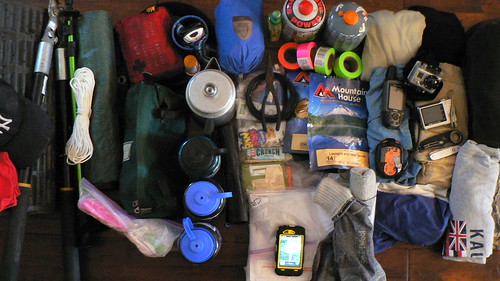 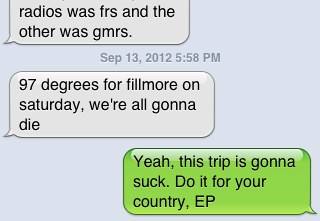 After getting our vehicles in place for the Temescal–Tar Creek Gate truck shuttle, we prepared to jump into the bed of the truck that would haul us up those two miles toward Dough Flat, shaving a wee bit of walk from our route. I did take the opportunity to again paraphrase Visteur and let the increasingly wary crew know we would enter this blistering cauldron with the approach that “the trail survey is optional; getting out safely is mandatory.”

And so after we jumped out of the truck just below Dough Flat and began our trek into the Wilderness, I was still guardedly optimistic we could pull this off. 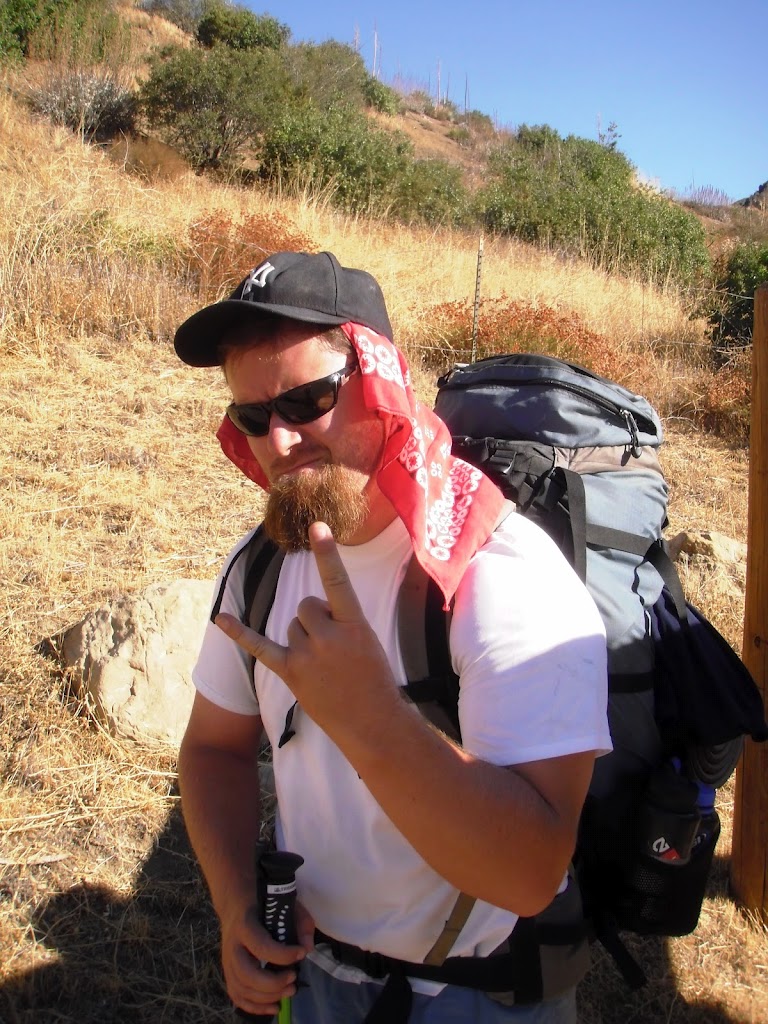 The swagger before the storm. Image courtesy and © Cowboy. 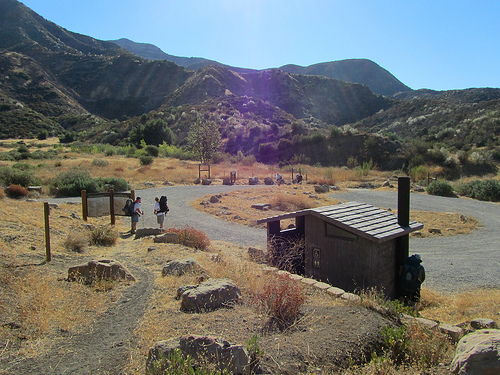 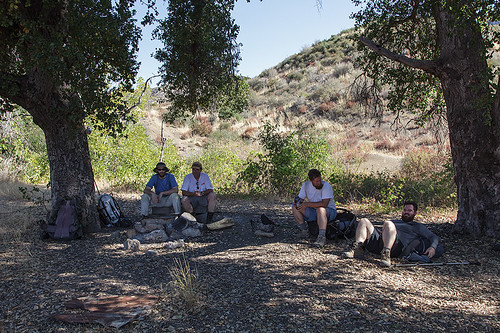 Enjoying some shade at Squaw Flat.
Image courtesy and © the Los Padres Expat.

It was, indeed, hot … and just by the time we reached the old wild catters’ camp at Squaw Flat, I could feel the heat sapping my legs. I made a slow go of the climb to the Alder Creek/Bucksnort split, and by the time we reached Bucksnort Spring (the cistern was bone-dry), I was in a bad way — sick from the heat, and just about ready to call off this exercise in pan-frying my feet ’til the winter.

It was about here Nico reminded me again he was breaking his own “hell no I don’t hike in the LP during the summer” rule, one he’d already bent to bag Cobblestone Mountain with Stillman earlier in the season, and one from which he’d almost needed to crawl away (which is saying something, the guy’s a mule). And Eric had run into nasty heat in the previous week’s sojourn to Piedra Blanca. He makes a great observation in his Piedra Blanca post, that “Sometimes you think [to] yourself, ‘this is going to be miserable with a chance of downright awful.’” So true. Maybe this just wasn’t going to be our summer (oh, wait, that’s whole point here … no summer is ever my summer). 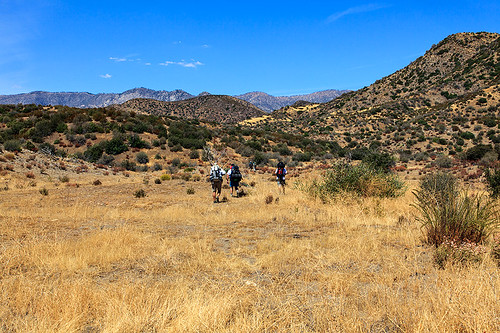 Cooking along the meadow above the Cow Spring drainage.
Image courtesy and © the Los Padres Expat.

But the going from Bucksnort into Ant is an easy couple of miles, so once we got to Ant I just planned to soak in the perennial creek and cool down. The tread down to Ant felt easier going than our traverse last winter, and so buoyed by the decrease in exertion (but still lagging), I walked into Ant with the crew, where we summarily dropped our packs and found spots in the shade. We were beat. Nico and the Expat had gone the other way in via the formal 19W18/19W10 junction to photograph the old sign there, Jonny was sprawled beneath an oak near the kitchen, Cowboy laid out near the firepit, and … hey, where was Eric?

An expletive issued from down in the creekbed, following shortly thereafter by the unwelcome news the creek held no water.

For half a second that didn’t compute, and I thought it a cruel joke to play. The Agua Blanca always had water, it was one of the in-commutable laws of the forest universe, wasn’t it? Eric wouldn’t joke about such things, I was testily informed. Hmm, too right.

We took quick stock of our remaining stores; between the six of us we had fewer than two liters, meaning we’d consumed upward of three gallons getting here. In short order we agreed Saddle Skirt was off the day’s menu, and would only be added if water was found both nearby and in vast quantities. Nico volunteered to scout downstream, and so we loaded him up with some empties and he headed toward the old Tin Can Cabin site downstream. Concurrently, Cowboy headed upstream in search of a source from which we could pull. 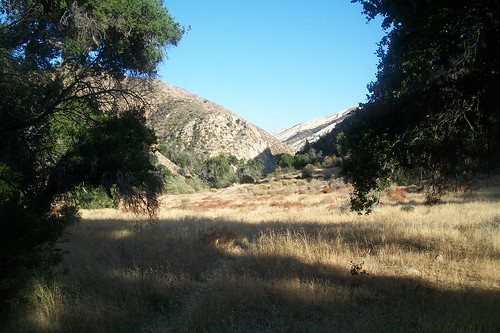 Cowboy returned with a “maybe,” dry cobbles but a steep ravine where the trees seemed pretty happy, and to which we could scramble if things got truly desperate. Noted. It seemed that Nico had been gone an awful long time, so we decided we’d give him two hours. He’d left at 3pm, and so we’d give him ’til 5pm … this was rough country, and even somebody who moves at his pace would be hard-pressed to sprint this corner of the forest.

I SPOTed my default “change of plans” message to USFS dispatch, and then we dozed beneath the massive oaks at Ant ’til 4:57, at which point I sat up and declared something to the effect of “Okay, let’s go find him.” And nary seconds later Cowboy caught sight of our water mule coming from the ravine far downstream. Success!

We had water, but only one scummy pool downstream from Tin Can Cabin had been located. And Nico had gone further toward the Big Narrows, to be greeted only by impassive poison oak, poor tread, and no further water. That was when we called it. It would be plain stupid to press on into the Agua Blanca with an unknown water situation, especially considering the major tributaries of the Agua Blanca are downstream from Cove (below the Big Narrows). Even to get out, we were going to need more water, and so a new task force consisting of the RSO, Eric, and Cowboy loaded up our remaining vessels, grabbed the headlamps and gravity filters, and with Nico’s precise description (something like “between the poison oak and the poison oak, in the middle of the horrible stretch”) of where our scum-laden salvation lay, headed out. 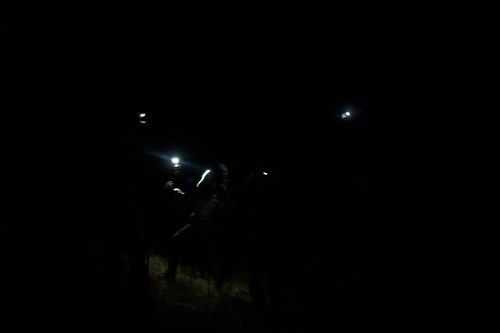 These oxen of the southern Los Padres returned in the dark with as much liquid life as they could haul. I fired up the stove, boiled up enough water to get a Mountain House or two into everybody, and we agreed we would execute our escape in the dark of night, when things were coolest. We slept hard for about four hours, with various members of the crew suffering through heat cramps, heat exhaustion, and some pretty serious dehydration, and arose a bit before 0200.

By 0300, we were packing back up the hill — and this was the best and most beautiful part of the trip. Under the light of our headlamps, I took point and navigated the neglected single-track back up (admittedly rather slowly). Around 0400 — still not to the top — we took an extended respite on a barren patch of scree, extinguished our lamps, and enjoyed views of the night sky one would more expect from the rarified air of the Pinos lookout. We sat a while identifying various constellations and watched Venus rise over the ridges to the northeast. Several shooting stars raced across the sky … were I the superstitious type, I’d have likely taken them as an endorsement we’d made the right decision. I was still feeling extremely drained, but we had water. 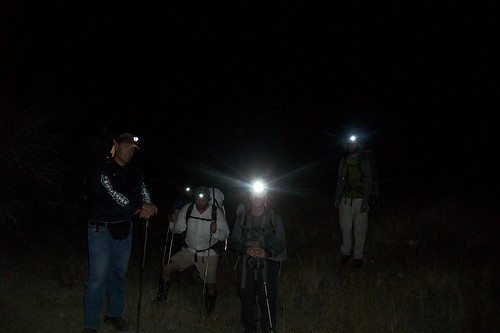 To the Expat’s credit, he took the “Nalgene is half-full” approach, and was almost gleeful to experience a noctural navigation of the Bucksnort and southern Alder Creek trails. I was grateful our severely truncated trip wasn’t a complete failure after all. It was something of a zombie march out of there, and with me in the lead, a slow one at that. At two points I quite literally dozed off while hiking … I’ve never had that happen before. It was surreal to be jarred awake by walking off into the brush. 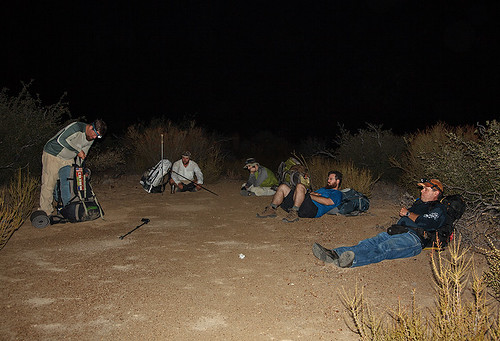 In time we reached the washout just below Dough Flat (the one that has caused this stretch of road to be closed for seems an inordinate amount of time), and we summarily dropped our packs. Cowboy and I left the rest of the crew and hiked the remaining miles to the Tar Creek Gate for the trucks. We shuttled, grabbed the vehicle and gate key awaiting us at Temescal, and returned to find the boys has erected a respectable shantytown (and eaten a bunch of my food!) in our absence. 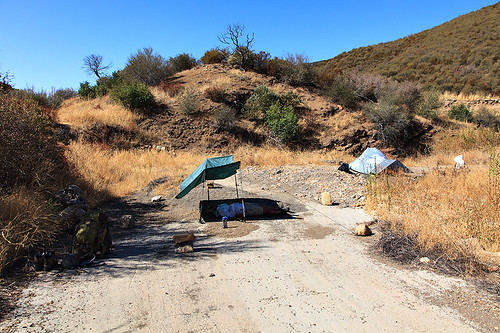 A lousy experience, unless leaving Ant Camp under a moonless wilderness and passing through dark, empty meadows feeling there’s a cat watching just out of headlamp range elicits some child-like stirring of joy in your soul (Expat).

We survived with no lasting damage, but I really shouldn’t hike in conditions like this. It could get me killed one of these days.