Diamonds in the Rough, Part 2

Today let’s discuss (abandoned) trail camps in questionable locations. Not necessarily safety-wise, but just plain “why would one set a camp here?”-wise.

Some, over time, have sort of Darwined their way out, regardless of USFS plans for the sites. This is probably best-illustrated by Beartrap No. 2 along what is now the Gene Marshall/Piedra Blanca NRT, and Three Pines along the Chorro Grande Trail. Both were wiped out in the floods of 1974 (Three Pines was flooded out on an almost-annual basis, which is why it was on the Forest Service hit-list when the flood removed it “on schedule” without expense to the tax-payers).

Amongst those still in decent repair, one of the most ridiculously accessible — and yet nearly untouched — trail camps is the “original” Ortega trail camp along the Ortega motorcycle trail. Labeled “Ortega Vieja” on Conant’s map, the site sits along the headwaters of Cannon Creek and was supplanted by the current Ortega (motorcycle) camp further north. Dirtbikers seem to use the trail so infrequently I find this route to be a pretty fair (albeit dry) little trek. 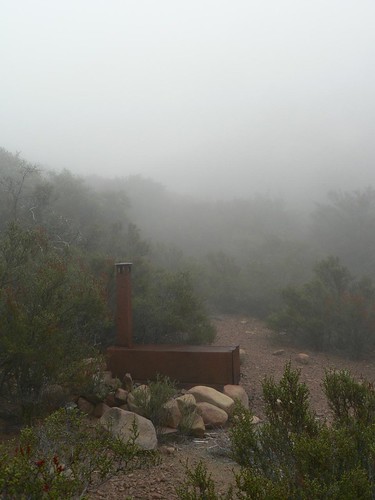 As for the camp itself … well, truth be told, it seems a strange spot for a site to be placed. It neither takes advantage of the shelter afforded by the boulder field just up-trail, nor does it feature a reliable water source (nor more than two persons’ worth of bivouac space, and good luck staking a tent in all that stone!). I can’t blame the motorcycle enthusiasts for putting in the work to build the other site where they did.

Just up the slopes to the NE is Dry Lakes Ridge. The two sites there that were given up in the 70s bore the creative names of Dry Lakes East and (yes) Dry Lakes West. The Western site (mentioned in the previous post) is a nice spot, located (to using Magney’s nomenclature) on the western edge of Basin 3A. And while “Dry Lakes Ridge” is a bit of misnomer in that the sage- and grass-filled basins weren’t/aren’t actually lake beds, the part they got right was the “Dry.” There’s no reliable water along this ridge. So while the West camp has a nice meadow and trees going for it, the East camp (reduced now to a bare patch of earth and a rock fire ring) isn’t very enticing.

NB: Like many of the sites that were lost to the ages in this area of the southern Los Padres, the East and West Dry Lakes sites only appeared intermittently on the LPNF Visitor’s Map (e.g., they do not appear on the 1967 map, but were shown on the 1968 and 1969 editions … only to again be dropped for the 1972 maps … check out the map tacked to the wall up at the Thorn Point Lookout and you’ll see what I mean). 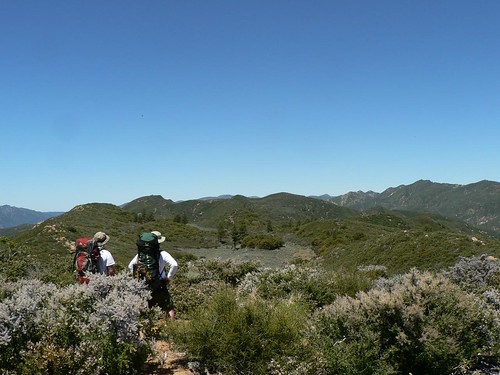 The first edition of Gagnon’s tome provided something a “to-do list” for area hikers who revel in seeking out these now-abandoned sites (*raises hand*), especially now that his guide is well into its fourth decade. In future installments of “Diamonds in the Rough” we’ll discuss Alder-Sespe and Sweetwater on the old Devils Gate (20W14) route — both are “gone” in terms of amenities, but the sites themselves are still fine bivouac/guerrilla sites — as well as a number of sites in the eastern Sespe Wilderness.

“Would you say the Agua Blanca and Cobblestone Trails had a plethora of primitive camps?”

4 Responses to Diamonds in the Rough, Part 2