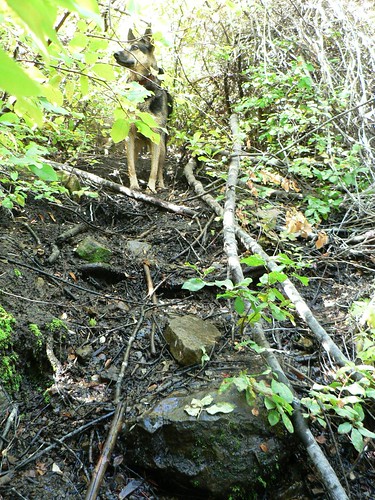 Prologue: This past Memorial Day weekend (2010) some of the crew and I spent 2 days exploring Dry Lakes Ridge off the 33. A great (and very isolated) spot. We had parked a second vehicle at the confluence of Tule and Sespe Creeks (near that big slide that went over the highway in 90s) in case we could find the drop-in to Tule Creek from the ridgeline between the western edge of the Dry Lakes Botanical Area and the Ortega Trail. The second day didn’t go as well as we’d hoped, and so after a few hours of pushing through some nasty and unforgiving brush, we headed back the way we had approached the Dry Lakes, but with plans to return.

So on the morning of 9/13/2010 one of the veterans of that aborted attempt and I took the pack for an exploratory hike up the Tule Creek drainage, starting at the Sespe confluence. There’s never been much mention of the old Tule Creek (23W17) trail beyond the old LPNF visitor maps from the 60s and earlier and a brief write-up in McTigue’s earliest mountain biking guides. I think the trail was a victim of the 1974/1975 shut-down in services that hit the Ojai and Mt Pinos districts so hard. 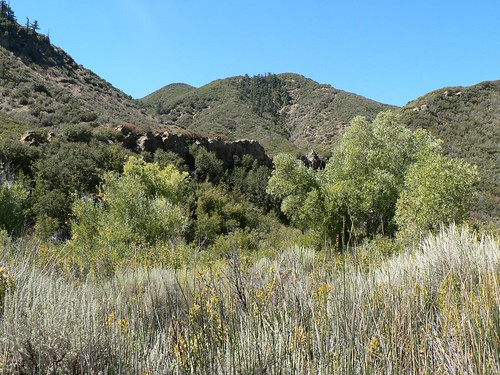 The tread, while very overgrown in spots, seems to be getting the occasional visitor, and is completely doable. We saw some recent trail work and some that was half a century old if it was a day. There were a fair amount of spent 12-gauge shells crumbling with age — and some far more recently dropped –- in the early stretches, but after the third main creek crossing the trail petered out to basically a game trail. Plenty of deep, deep pools along the way (some with some good-sized trout), loads of very fresh bear scat, one cougar print, and more quail than I think I’ve ever seen in my life.

We stopped at the base of the drainage that we think is where the trail up to Dry Lakes heads; by then the going was choked with whitethorn ceanothus, and we hadn’t carried any loppers. We were out and back to the truck before noon; awesome.

One Response to Tule Creek