A Tale of the Other Timber

Speak with another wanderer of the southern Los Padres, and when the topic comes to Timber Creek, it’ll be that one in Santa Paula. You know: the road, the gates (hope you have the codes), and Santa Paula Peak. You know, Timber Canyon. Everybody knows Timber Canyon.

Well, yes. But what about that other Timber Canyon, the headwaters of which aren’t too far from those of its better-known cousin? The one that heads northward from beneath Hines Peak and drains into the Sespe?

Last spring — while ZK and I were preparing to recon the Red Reef trail to determine if the Day Fire has really chewed up the trail as bad as we’d heard — I sat idly in my dungeons of maptitude poring over various cartographic incarnations of that stretch of the Sespe: maps from the era when you could drive all the way out to Sespe Hot Springs (and start your very own forest fire, like Johnny Cash did in 1965); the era after the road had closed but you could still mountain bike it; and the post-wilderness era when everything was to be traveled afoot (despite the clown I saw this past weekend mountain biking back from Willett … but I digress). 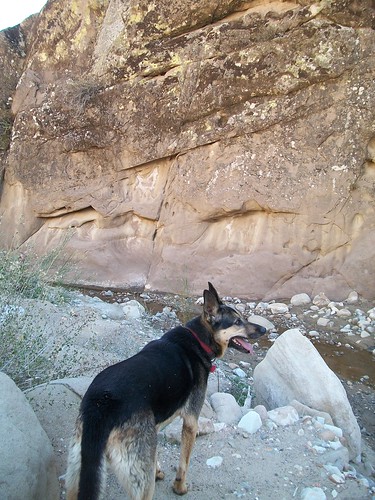 So were they indeed the same? It nagged me for months. I never found a Timber Canyon campground on any of the 7.5’ quads, and while the USFS visitor maps did indeed show the site, their smaller scale allows for a far greater margin of error (more on that in another post), and so there in my map dungeon I determined the two — Oak Flat and Timber Canyon — were indeed not one and the same, and this past weekend while en route to Willett I set out to find out for sure. 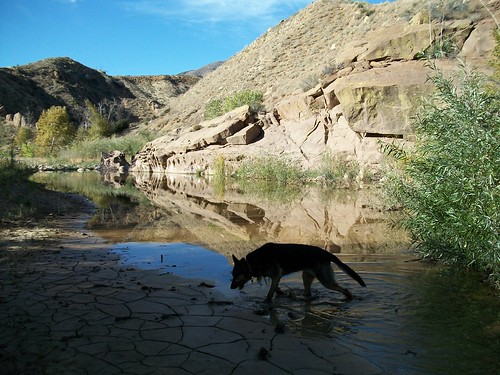 I plotted a rough waypoint as to where I thought the site would be, and once on the trail, cut down Kimball Canyon, hopped across the Sespe, and when I reached the confluence of Timber and Sespe Creeks and it was all blackberry brambles, poison oak, and wild rose with an unpleasant garnish of poodle dog bush, I must admit I lost some of my zeal. Even my Canis semprus adventurus seemed reluctant to push through that hedge of doom (her sense of when a trail is rotten is usually spot-on, however, so I didn’t question it for a moment).

So we made our way a bit further south along the Sespe into a nice oak-shaded flat (but not Oak Flat, let’s be clear!) and then headed back toward Timber Creek, hoping to find an easier way into the drainage from this side. We found a decent game trail, and headed up, circumnavigating one particularly massive live oak bough that had fallen from damage sustained during the 2006 Day Fire. 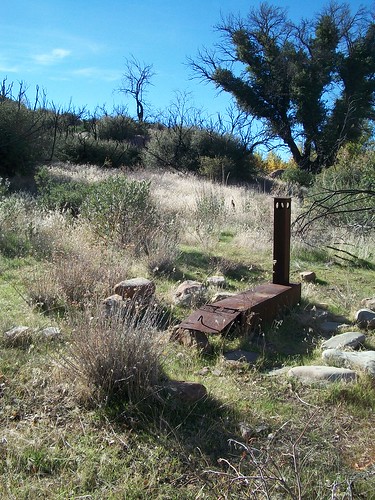 And bam. Right there. Ice can stove in mint condition, and nice fire ring, a little flat for the tent … clearly not used in ages … but this was Timber Canyon site, a very short walk from either creek. (By way of toasting our success, the uber-hund got the larger half of our traditional “we found it” PB&J.)

After our victory sandwich and a tin of sardines, I stood and — I have no idea how I missed it the first time around — spotted two more stoves beneath the still-extant portion of the semi-fallen oak. Back in the day, it would have made for a lovely spot to grill up dinner.

Mystery solved. Now I’m back in the dungeon, poring over the maps and plotting the next recon ….

One Response to A Tale of the Other Timber